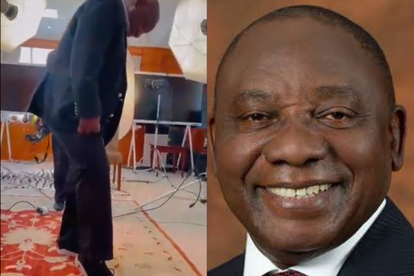 South African President Cyril Ramaphosa has gone viral on social media after he was spotted wearing a pair of local brand sneakers. In a clip shared by the Bathu sneaker company owner, Theo Baloyi, the president is seen testing out the shoes during what appears to be a photo shoot.

The clip has since gone viral as hundreds of South Africans commented on the president’s support of local brands.

A clip of the president seemingly enjoying the feel of the shoes on his feet was shared by the brand’s proud own Theo Baloyi who thanked the political leader for supporting his homegrown business.

.@CyrilRamaphosa,” he captioned a video of the president giving the shoes a feel.

In the clip, Ramaphosa is wearing his black usual suit and a big smile on his face while a cameraman snaps away at him and his cool sneakers.

Take a look at the clip below:

The post received over 4000 reactions from Twitter users who clapped proudly for Baloyi who, according to Briefly News, founded the company in 2015 and has been going strong ever since.

Many of them also took some time to poke fun at their president.

“Wow how cool is our President”

. Amandla leader. Be encouraged. Build SA one brick at a time.”