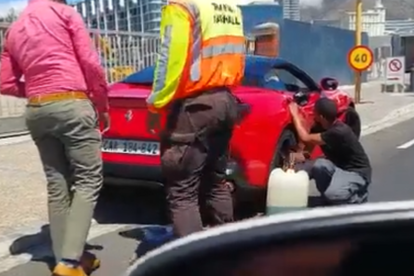 Even Ferrari drivers are running out of petrol. Image via Twitter: @matthewkanniah

Even Ferrari drivers are running out of petrol. Image via Twitter: @matthewkanniah

Many South Africans have been left laughing out loud by a video of a Ferrari driver getting stuck because he had run out of petrol. For many people, the photo was an eery reminder of just how bad the petrol price hike is affecting almost everyone in the world – even those who can afford to drive expensive sports cars.

As they do, many locals were soon cracking hilarious jokes about the man’s unfortunate situation while also calling on something to be done about the petrol crisis that has not only hit South Africa but many other parts of the world too.

A Ferrari driver recently found himself facing a problem that many motorists find themselves facing – a shortage of petrol.

In the video that was shared by car enthusiast and content creator @matthewkanniah, the driver of the multi-million rand car can be seen stuck on the side of the road.

Luckily for him, the ordeal didn’t last too long because someone soon came along with a jerry can filled with petrol to help him out of his sticky and somewhat embarrassing situation.

In the clip that was shared on Twitter on 28 January this year and was captioned:

Since then petrol has gone up to over R21 and is expected to go up to around R24 in April this year. The biggest cause for this is the Russia-Ukraine war which started in late February.

SA has their say

Meanwhile, many locals flocked to the comment section to either laugh or sympathise with the man who found himself an unfortunate victim of the petrol crisis in SA.

“Everyone here shouting “jealousy” like this man finna pay you to defend him 😂It’s funny coz a guy in an expensive ass car ran out of fuel. Which you don’t see often. Even in an average car that’s an embarrassing situation to be in. Nothing more nothing less.”

@SuperXolani defended the driver by saying: