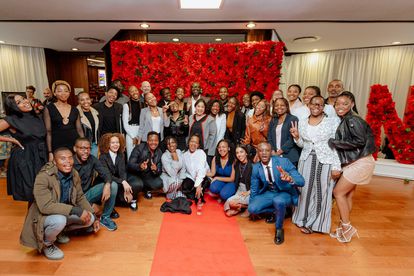 The scholarship includes the Netflix Creative Equity Scholarship Fund (CESF) and the BLM Postgraduate Scholarship Programme which were both established in the past year to provide financial support to African creatives to access quality tertiary education in film and TV-focused disciplines.

The scholarship fund for sub-Saharan students is part of Netflix’s global Netflix Creative Equity Fund launched in 2021 with the goal of developing a strong, diverse pipeline of creatives around the world.

The Netflix Creative Equity Scholarship Fund celebrated the inaugural cohort of 54 beneficiaries from 5 countries (South Africa, Lesotho, Zimbabwe, Eswatini and Zambia) studying across 4 provinces in South Africa in the Western Cape, the Easter Cape, Gauteng and Kwa-Zulu Natal, at a ceremony held at Johannesburg’s University of the Witwatersrand (Wits).

“We are so excited to celebrate this first-class of beneficiaries, it has been coming for a long time.  This truly is  the golden age in the era of African storytelling.  In the past our stories have always been told by others.  We are now in the era where we get to take charge and tell our own stories.  Stories don’t appear by magic, it is about the storytellers and the pipeline of creatives who are working hard to hone their talent and their craft. It is important for us to invest in the people and grow that pipeline to continue to tell African stories. We hope that we are able to help open the door for the next generation of storytellers and we are honoured that we are able to assist the growth and guidance of South African and Africa creatives.”

All the beneficiaries have received a full scholarship which includes – tuition, accommodation, living stipend and education supplies. The inaugural cohort of awardees have enrolled for postgraduate, honours and degree courses across Film and Television Studies programmes at 9 different tertiary institutions.

The program is currently being administered by Tshikululu Social Investments in partnership with AFDA, WITS, UCT, UJ, AACA, TUT, CityVarsity, UKZN and the University of Pretoria. These nine institutions of higher learning in South Africa support the formal qualification and training of aspiring creatives from the region.

The ‘Class of 2022 Roll Call’ event served as an informal ceremony to bring together students, partner institutions and key stakeholders together to celebrate the scholarship’s recipients and the program at large.

In attendance were various government agency representatives, the Minister of the Department of Communications and Digital Technologies; Khumbudzo Ntshavheni, Chief Director of Industrial Financing of the Department of Trade, Industry and Competition; Susan Mangole, Manager of Legal and Regulatory Affairs at the Film and Publication Board (FPB); Pandelis Gregoriou, and Chairperson of the National Film and Video Foundation (NFVF); Tholoana Ncheke.