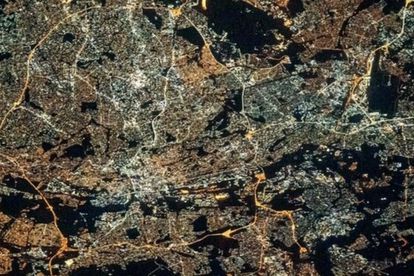 The National Aeronautics and Space Administration (Nasa) shared a spectacular image of Johannesburg and the West and East Rand in Gauteng.

Gauteng Weather shared the image originally captured by Nasa astronauts after the International Space Station (ISS) was visible on Wednesday, 8 September in South Africa and parts of Limpopo and the North West.

The South African reported that the International Space Station has been orbiting our planet since 1998. From most locations on Earth, you can see ISS every now and then for yourself. It looks like a bright star moving quickly from horizon to horizon to us on Earth. As suddenly as it appears, it disappears.

Twitter users were quick to try and spot it in the night sky:

South Africa | As seen from space

Over the past couple of weeks, South Africa has been on the radar of Nasa and astronauts aboard the space station, specifically Shane Kimbrough who also shared a photo of Cape Town as seen from space.

Kimbrough took to Twitter – as many of his colleagues do – in order to share the magnificent photo. He said: “This is Cape Town at night from space! This breezy bay city is at the very southwestern tip of South Africa and is known for its stunning rugged coastline studded with great beaches that are perfect for surfing. Goodnight Cape Town!”

He went on to share an aurora time-lapse while orbiting over South Africa and Australia as well.

Kimbrough went on to explain what an aurora is. In simple terms, an aurora is a natural light display in Earth’s sky, predominantly seen in high-latitude regions.

Kimbrough says that these dynamic lights are a result of electrically charged solar wind colliding with Earth’s magnetic field.

“When a solar flare occurs on the sun, it blasts waves of charged particles towards the earth,” he wrote on Instagram. “These particles will then collide with the Earth’s magnetic field, causing a reaction in the sky. The atoms in the reaction become full of energy, and once that energy wears off, the calmed atoms then release the colourful lights that we see as an aurora.”