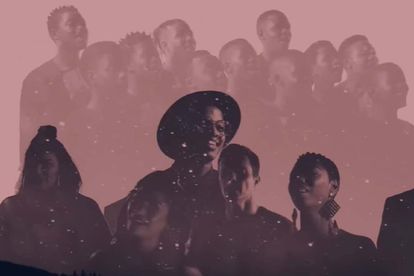 The Mzansi Youth Choir recently recorded and released a beautiful rendition of the popular Christmas carol Silent Night. Together with other famous local artists, they sing the track in six of South Africa’s official languages.

“We have built so many strong relationships with artists from all genres”, chorister Babalwa Maqungo said according to CN&CO. “We presented the idea of Silent Night and an even bigger concept, #HopeForTheHolidays to them and they all said yes!  We believe that through #HopeForTheHolidays we can inspire deep connections between each of us by exploring each others’ languages, all during the festive season!

“None of the vocal artists in the collaboration sing in their home language on the track,” said Lucky Khumalo, bass singer in the choir.  “We had so much fun working with each artist in studio, teaching them to sing in our home languages, such as Sesotho and Isizulu, but also learning better pronunciation of the Afrikaans verse from some of them!”

A major focus of the #HopeForTheHolidays concept is the idea that there is so much joy to be had as a South African learning more about other local languages.

“When we learn even the smallest thing about another person’s language, we immediately feel closer to them”, said alto voice Lelo Chibielo.

“Hearing it sung in our local languages will hopefully open the door for conversations and deeper cross-cultural empathy.  We also hope that choirs and families around South Africa will give singing this version a try!”