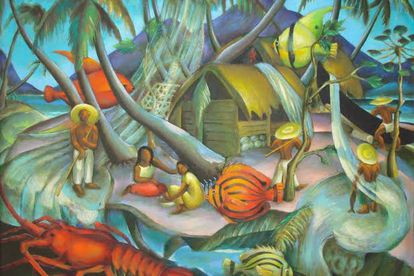 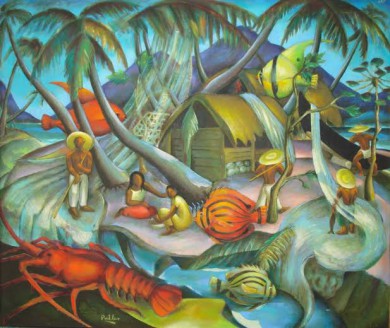 The sale will feature some of the country’s finest artworks by the major South African artists, with particular attention to the remarkable works by the internationally acclaimed artist, Alexis Preller.

As a young child Alexis Preller was fascinated by the colour and excitement of the theatre, so it was against all expectations that he would choose to follow a career in visual art. Encouraged to escape the tedious economic conditions in South Africa and pursue his destiny abroad, the young Alexis Preller arrived in London in 1934. It was during his fine art academic studies in London and Paris that he became increasingly influenced by western modernism, which was turning towards primitive art for inspiration.

Aspects of the exotic language which came to be identified with early modernist primitivism were evident is Preller’s initial works, particularly drawing inspiration from the French artist Paul Gauguin, who styled himself and his art as ‘savage’, and the Dutch post-impressionist painter Vincent van Gogh. His extensive travels across Africa, exploring the alluring surroundings of Swaziland, the Seychelles, Zanzibar, Egypt and the Congo, later enabled Preller to ultimately define his own African style. Tremendous inspiration was forged out of his travels, forming the pictorial architecture of his oeuvre and enabling him to shape the artistic freedom he was continuously pursuing.

One of his finest works created during his time spent in the Seychelles, ‘The Fishermen of Beau Vallon’ (£150 000 — 200 000), eloquently captures his impressions of the island, where he had lived for several months. This stellar lot demonstrates the artist’s absolutely perfect command of the medium, while also revealing his superb instinctual sense of colour. This lively painting sparkles with the buoyant spirit of the islanders yet there is a very definite structural purpose served by almost every line, form and colour passage. This vibrant and imaginative panorama is a composite of the natural features and the daily human activities which are entwined in a single space and common time frame, exuding a story book charm. This illustrious artwork was included in the Alexis Preller Retrospective, hosted by the Pretoria Art Museum in October 1972.

The second leading lot, ‘Breying the Reims’ (£40 000 — 60 000), is an earlier work in which Preller’s admiration for the largely self taught, Dutch, post-impressionist painter, Vincent van Gogh is evident. This artwork is an interesting genre study (preparing leather strips for various applications) and this colourful figure composition contrasted significantly with his sketchy linear approach, a common technique of his other early artworks painted during this time. It has been suggested that there are hints of Preller’s debt to Irma Stern in the African figure study occupying the foreground of the artwork. This artwork not only demonstratesPreller’s diversity of style and subject matter but it also highlighted his continuing search for his specific personal direction and a pursuit of his own creative voice.

Drawing attention to the maturation of Preller’s style and the influence of the scientific painter of Quattrocento Italy, Piero della Francesca, ‘The Florentine Head’ (£12 000 — 18 000), reflects the seriousness with which Preller studied and elicited qualities from Piero’s style, infusing it in his own work. Painted in 1958, a very positive time in Preller’s life that enabled the culmination of the bold concepts which the artist had nurtured over many years. This arresting artwork is a testament to Preller’s sharpened understanding of scale in composition and it is through his meticulous manipulation of light and space that a striking and elegant ambience permeates the image, almost palpable to the observer.

Hannah O’leary, head of the South African art department is delighted to include these energetic and diverse Preller’s works in the sale, adding: ‘Preller is not only celebrated as one of South Africa’s major artists of his generation but also a pioneer who examined his relationship with Africa and in so doing he defined an African style at the peak of the 20th century.’