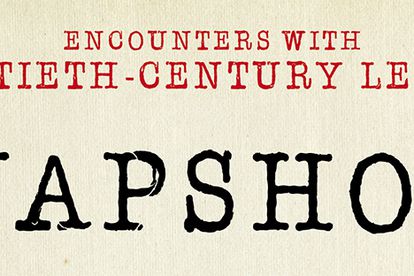 Born in Kroonstad in 1925 he came to London via Paris and New York and worked for many years as a critic and an interviewer on newspapers here. (Incidentally, he also wrote the English lyrics for Les Miserables, the world’s longest running musical.)

Snapshots is a selection of his best interviews done with the famous, the admirable, the hateful, the glamorous, from Yul Brunner – The Bald Philosopher, to Cary Grant – Love and Marriage, and Leni Riefenstahl – In Hitler’s Shadow to Frank Sinatra – Ol’ Blue Eyes. They are all people who stood out in the crowd. This crowd was mainly during the Golden Age of Hollywood with a few on the side like boxer Cassius Clay, millionaire miser J. Paul Getty and guitar-plucker Tommy Steele.

Kretzmer’s style is intimate and straightforward. You get the impression he somehow managed to create an equality between himself and his quarry and there seems to be if not a chumminess, a frankness and honesty about these interviews. Example : Spike Milligan enters his Notting Hill office in a chunky green jersey and a foul temper. And : If Cliff Richard wants to do himself a favour he might resolve
in future to open his mouth in public only to sing – and not, for Heaven’s sake, to talk.

There are 90 encounters in all in the book and published alphabetically you can just dip in and out as you like. Some are longer like Marlene Dietrich (Flame in the Night) and Walt Disney, The Man Who Invented a Mouse and was afraid of mice. And some are shorter, brisker. Always a quick but telling glimpse into the life of somebody interesting, Kretzmer knows how to use words well and reading his is a real pleasure.