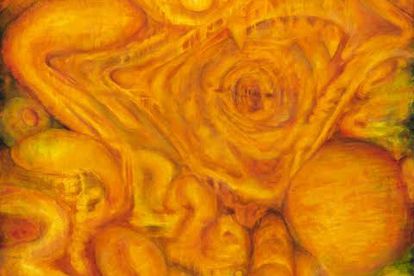 How did you get to this point?

In the ‘90s I studied Fine Art at the University of Cape Town. Michaelis is a good academy, but at the end of apartheid was steeped in post colonial angst. I was from Zimbabwe and mentally we had begun our transformation ten years earlier. I also had a fair measure of technical expertise but not much to say visually. At the time there was amazing new press freedom and opportunity on offer, so I started a magazine similar to Time Out. I also felt that if I was to make interesting art I needed to be punched in the face by life a few times.

So after a successful publishing career now is the time?

I have been evolving my work over the last eight years but now is the time to start showing. To use the chrysalis metaphor might seem quaint but this is how I feel. I have been a pupa fattening up on experience; hopefully my wings will be worth looking at.

Why have you chosen such a big venue for your first exhibition in London?

My work is large by nature and its best presented in a venue of this size. Plus it’s a beautiful old up-cycled railway arch and I couldn’t resist. (It’s 50m from the Hoxton Overground station, so also easy for people to get to). There are places left on the guestlist, so if anyone wants to come they can contact me via my website: gordonglyn-jones.com

What is your work about?

I seek to represent the beauty which is always a by-product of the change between two states. For example, the most striking skies are formed at dusk and dawn. The drama surrounding conception and death fuel our greatest works of art. My oils inhabit the space between our animal and sentient selves; they are evocative altars to a dying natural world. My pencil works, much more simply, explore the essence of kites.

How do kites fit in?

The kite is a simple, human construct that connects two elements. I am investigating the sculptural and metaphoric nature of ‘kite-essence’. This very personal motif has grown well beyond what you’ll find hobbyists flying each weekend. I travelled to China and Taiwan and discovered a rich ancient heritage of totemic kite making.

It was refreshing to bring my academic training to a completely new (but ancient) artistic tradition. It struck me that the intersection of Chinese and Western culture is an interesting and exciting place to inhabit. I do large 4m-wide scrolls consisting of a grid matrix of scores of smaller, highly detailed pencil works similar to the tradition of technical drawing.

What does the title: AND GOD SAID: “REALLY” mean?
My work can also be read from an environmental perspective and the title is to do with what we are doing to ourselves. In essence we are the first species to have dominion over the animals, but forget that we are still animal in nature and subject to its laws. I guess you could say my work is nature staring us down for a fight that it knows it’s gonna win. I think growing up in Africa with animals in their natural state ensures that relationship is strong in my mind.

Did growing up in Zimbabwe influence your work?
I was very lucky to have started my art career under the fabulous artist Helen Leiros who runs Delta Gallery in Harare. Anyone who has ever had this privilege will tell you it’s like dashing towards the embrace of a tornado. If you make it out alive with Helen’s approval you have some chance in the art world; if not, you’ll know about it. She’s passionate and deeply loves her students but tells it like it is.

How have you found the reception of the London art scene?

I have had extremely positive feedback. As a matter of fact the demand for Southern African art has increased tenfold in the last five years. Artists such as the Wylie brothers, Craig and Duncan, Lionel Smit, Tapfuma Gutsa and Paul Emsley have all laid the ground and gallerists are on the lookout for new diaspora artists. I believe there will be a group show quite soon celebrating the best of them.

I will be writing a monthly column in The South African so watch this space!