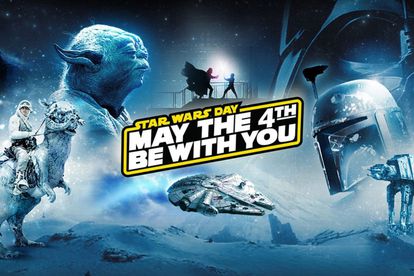 Curious about ‘Star Wars’ Day? Here’s everything you need to know. Image via Twitter @Louhanluke

Curious about ‘Star Wars’ Day? Here’s everything you need to know. Image via Twitter @Louhanluke

Wednesday 4 May marks annual Star Wars Day and of course, the “May the fourth be with you” jokes are flowing on social media. With more than nine films, five television series and more than 40 books, Star Wars is one of the most successful multimedia franchises in the world.

Here’s everything you need to know about Star Wars Day.

According to Gaming Section, the phrase: “May the Force be with you” is often credited to Star Wars Jedi Master, Obi-Wan Kenobi who was in the original 1977 Star Wars film. Interestingly, the phrase was said by a minor character, General Dodonna as he dismisses troops.

According to The Citizen, the phrase can also be credited to Britain’s former prime minister, Margaret Thatcher, who officially took office on 4 May 1979.

The first-ever Star Wars Day event was held at the Toronto Underground Cinema in Ontario on 4 May 2011.

TAKE A LOOK AT A COMPILATION HERE

Take a look at some interesting Star Wars facts that might interest you.

TAKE A LOOK AT SOME HILARIOUS MEMES HERE