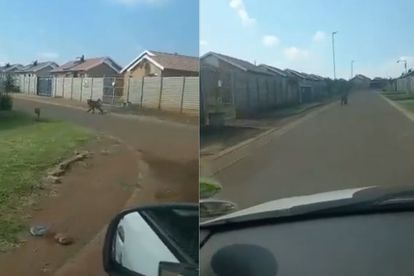 Monkey business: Take a look at this baboon roaming around in a Johannesburg suburb. Image via Twitter @TebohoMmirwa

Monkey business: Take a look at this baboon roaming around in a Johannesburg suburb. Image via Twitter @TebohoMmirwa

Videos of a baboon casually roaming around Sky City in the south of Johannesburg on Tuesday 3 May have been making the rounds on Twitter.

In one of the videos, a baboon runs down a residential street while the Tweep filming follows in a car. The baboon gives them the slip, ending up in somebody’s yard.

In a follow-up video, one can see the baboon sitting on a rooftop before disappearing from view…

BABOON ON THE LOOSE!

On Tuesday 3 May, a Twitter user shared some footage of a baboon on the loose in Sky City near Alberton. The baboon makes a dash for it, before he slips into someone’s property.

The tweep who shared the video, wrote: “This country is alive with possibilities, Sky City in the East Rand.”

Reacting to the first video, some tweeps asked if it would be a safety issue for some of the residents.

“Imagine just chilling in your backyard basking in the sun and then boom, a baboon is right there with you,” wrote one tweep.

“It was definitely headed home,” wrote another tweep.

“I nearly fell out of my chair when I saw this, a whole baboon in my hood.”

CAN YOU HAVE A BABOON AS A PET?

If you’ve thought about having a monkey or a baboon as a pet, the simple answer is, don’t do it.

According to The Spruce Pets, monkeys are “permanent toddlers”.

“Pet monkeys also might not take well to new people in your life, including spouses and children and they make it hard to get away for vacations.”

A South African blog, Monkey Sanctuary, also warns against having a monkey as a pet.