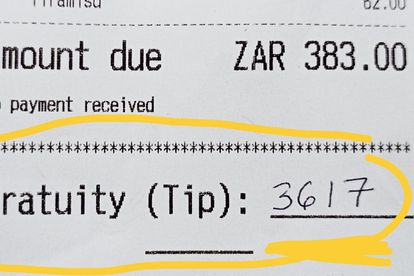 In 2019 and 2021, Hout Bay pizzeria Massimo’s was voted the best pizzeria on the continent. This year, the Cape Town pizzeria is making headlines again after a patron left a R3 617 tip for a waiter. The pizzeria shared an image of the receipt on their Facebook page on Wednesday 7 September, jokingly mentioning that they needed a mathematician to confirm the numbers.

On Tuesday 6 September, a patron visited Massimo’s in Hout Bay for dinner and the management was stunned by what happened next… The patron ordered several items including a classic Margherita pizza, extra chilli and a tiramisu for a sweet ending to their meal.

The bill was only R383 but the patron left a generous tip of R3 617 for the waiter. Posting the receipt on Facebook, Massimo’s praised the patron’s big heart, writing: “There is still love in Hout Bay.”

“Looking for a mathematician to confirm…Is this a 950% tip?”

COULD IT HAVE BEEN A MISTAKE?

As humans, sometimes we might make mistakes but the generous tip left at Massimo’s was certainly not a hoax! The pizzeria’s Facebook post received more than 70 likes and a few heartwarming reactions in the comments section.

One Facebook user did warn the pizzeria to double check the generous tip.

She wrote: “Be aware though please. Same happened to me, customer phoned to say it is a mistake and asked for a refund, which management did, unfortunately the whole amount including the cost of the meal.”

Massimo’s responded: “No worries, I even ran after the person and all was confirmed.”

To kick off Spring in Mzansi, a mysterious man racked up a R200 000 bill at The Milk in Cape Town. The man reportedly purchased a bottle of Hennessy for every table. The man even left a R19 000 tip for the waiter.