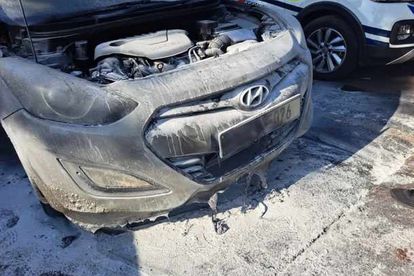 Following a learner torching an acting school principal’s car at a school in KZN, tweeps blamed the unlawful act on poor parenting and the banning of corporal punishment. Image via Twitter @risefm943

Following a learner torching an acting school principal’s car at a school in KZN, tweeps blamed the unlawful act on poor parenting and the banning of corporal punishment. Image via Twitter @risefm943

Social media users are blaming poor parenting following an incident that took place at a school in KwaZulu-Natal on Wednesday 7 September which saw a learner setting the acting principal’s car alight.

The Grade 10 learner from Northbury Park Secondary School in Northdale in Pietermaritzburg, KZN, had been reprimanded by the acting principal for carrying a phone to school which was, in turn, confiscated.

According to a video shared by an IOL journalist on Twitter, the disgruntled pupil returned to school with a petrol bomb and set the acting principal’s car alight.

A video of the incident, which shows some of the staff members attempting to extinguish the fire, has gone viral on social media.

IS THE BANNING OF CORPORAL PUNISHMENT TO BLAME?

Another incident of a similar nature took place at another school in KZN where learners from Ndengetho High School in the West of Durban torched their school after their phones were confiscated during an inspection.

With the latest viral school incident setting tongues wagging on social media, tweeps weighed in with their views. For many, the incident is a result of the abolishment of corporal punishment in schools and South African households.

“Time to bring back parental hiding so that kids can get manners,” one Twitter user wrote.

Examples of corporal punishment include smacking children (even lightly), pinching them, throwing objects at them, forcing them to stand in uncomfortable positions, and not allowing them to eat meals or use the toilet.

WHAT ABOUT POOR OR GENTLE PARENTING?

Another tweep suggested that some parents are too busy clubbing and partying instead of enforcing discipline in the home. While another blamed the “soft or gentle parenting”.

Good To Know describes gentle parenting as a peaceful and positive approach to parenting. It is classified as a parenting style that promotes a relationship with your children based on willingness and choices, rather than demands and rules made by a parent.

The idea of gentle parenting has been a hot topic on social media for some years, as some tweeps feel that it creates entitled and disrespectful children who think throwing tantrums is acceptable. Some tweeps, who were raised through corporal punishment, have argued that they “turned out fine” — News24 reports.

However, Save the Children South Africa (SCSA) CEO Steve Miller, told the publication that corporal punishment affects a child’s brain.

“It could also be harmful to development, affecting a range of health and social outcomes. Unbelievably, such violence is seldom considered abuse,” he says.