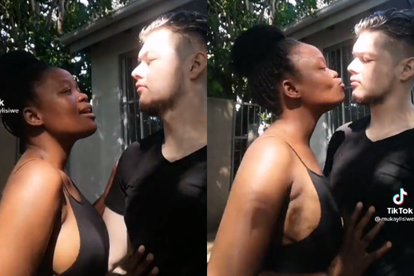 This young couple are poking fun at Malema and his “kiss the boer”. Images via Twitter: @phathumakwarela

This young couple are poking fun at Malema and his “kiss the boer”. Images via Twitter: @phathumakwarela

On Wednesday 16 February, Economic Freedom Fighters (EFF) leader Julius Malema found himself in the Equality Court sitting at the High Court defending his usage of the Kill the Boer song. Things took a funny turn when Malema denied that he said “Kill the Boer”, and insisted that it was rather “Kiss the Boer”.

The clip of Malema’s testimony has since gone viral and one interracial couple has decided to poke fun at Malema and his “Kiss The Boer” saga.

“Our songs are not in any way meant to engage in any literal engagements,” said Malema while defending his usage of the Dubul’ibhunu or “Kill The Boer” song.

In October 2020, AfriForum first lodged a complaint against Malema, Ndlozi, and the EFF after they sang the Dubul’ibhunu song outside the Senekal Magistrate’s Court in Senekal, Free State, during the bail hearing of those accused of murdering farm manager Brendin Horner.

Since then, Malema has defended himself in court by saying that he did not say “kill the Boer but rather kiss the Boer.”

A young couple has since decided to poke a little fun at the EFF leader by using a voice-over of Malema’s words in court to make a cute video of what he may have meant when he said “Kiss the Boer”.

In the clip, a young black woman, who plays the role of Malema, kisses a young white man while demonstrating what Malema means. Watch the clip that was shared by Twitter user @PhatuMakwarela on Sunday 20 February below:

Mzansi is laughing out loud!

“It’s official. We are a country that takes nothing seriously. I’m sure even at the end of the world we wouldn’t take it seriously. I love us.”