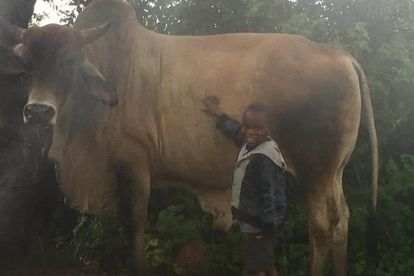 If you’ve got a 650kg Brahman Bull charging towards you, it’s all but certain your life is coming to an end. That’s unless you happen to know Limpopo’s youngest bull whisperer.

Three-year-old Wilson has an incredible bond with this super-protective mother. Thanks to his bravery, he spared the life of a local vet who was there to help give medical treatment to a calf on the farm. So, what went down?

Myra Marais is a veterinary doctor in the northeast. She was called out to rural Limpopo to inspect the health of a young Brahman calf. The calf’s mother didn’t take too kindly to this human intervention and managed to break free of its owner’s control.

Suddenly, the Brahman made its charge towards Myra. Of all people, she knew how much force a rampaging bull can generate. She realised her life was in danger, but the vet would soon play witness to a miracle.

Marais recalls the story on her Facebook page, which now has thousands of shares and almost 3,000 likes. Apparently, a young boy named Wilson stood between her and the animal, without an ounce of panic or fear.

He stood there, raising one hand to the charging beast. It allegedly responded in an instant, and “came skidding to a halt” before causing any serious damage.

The boy, dubbed “the bull whisperer” by a flood of commenters, is said to have grown up with the cattle and the pair have been able to form a strong understanding. The young lad’s bravery didn’t go unrewarded, either.

Myra Marais cheekily posed the question; “how many sweets is one’s life worth?”

What are Brahman cattle?

Brahman is a beef breed that’s used most commonly in the USA, South America and Australia. The breed is developed from the Zebu cattle of Asia and has been selectively bred from Indian strains of Kankrej, Ongole, Gir and Gujarat cattle.

They can weigh between 650 – 900 kgs, and have a distinctive and muscular appearance, with a prominent hump over their shoulders and neck. Thanks to Wilson, Dr Marais lives to carry on her work with animals. It’s a thankless task…