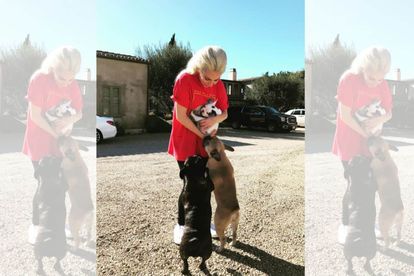 Two of the popular singer, Lady Gaga’s French bulldogs were stolen on Wednesday, 24 February 2021 after a gunman shot her dog walker in Hollywood, Los Angeles.

According to the BBC, a male suspect fired a semi-automatic handgun at the dog walker, named in US media reports as Ryan Fischer, before making off with the dogs. The victim was transported to a hospital in an unknown condition, Los Angeles Police confirmed to the BBC.

New footage recorded by a home surveillance camera, and seen by CNN, shows the dog walker on Sierra Bonita Avenue when a light-colored sedan slows down and stops next to him. At least two people can be seen exiting the vehicle and accosting the dog walker. In the video, the victim is heard shouting “no, no” as he struggles with his attackers.

One man is seen restraining the victim, as the other appears to point a gun. As a gunshot rings out, the victim is seen falling backwards as the men race back to the car.”Oh my God, oh my God, help me,” the dog walker is heard shouting just before the car drives off. He’s heard saying he’s been shot in the heart and lungs and that the two dogs have been stolen as neighbours rushed to help him.

“We heard blood-curdling screaming. And then within about a minute, a shot rang out,” a neighbour Rachel Mason told CNN. “We just ducked for cover, ran inside and called 911.”

Mason said it was a shocking scene and her neighbour helped to save the victim’s life.”We came back out and the guy was literally bleeding out as the cops and the paramedics were coming, and our neighbour was compressing his chest,” Mason said. “I didn’t know if he was alive or dead and he gets put on the stretcher and put in the ambulance.”

Lady Gaga has since offered a reward for the return of her dogs named Koji and Gustav. A third bulldog, named Miss Asia (who has her own Instagram account) ran away and was later recovered by police.

Gaga, whose real name is Stefani Germanotta, is currently in Rome working on a new Ridley Scott film, Gucci.

She is said to be offering $500 000 (R7 474 300) to anyone who can return the dogs. Her press representative said anyone with information on their whereabouts can email KojiandGustav@gmail.com with “no questions asked”.

Peter Bowes wrote for the BBC News that it is not known whether Lady Gaga’s pets were targeted because of her celebrity status, or whether it was a chance – or planned attack, because of the breed of dog involved. But, what they do know is that this is not an isolated incident involving French bulldogs. There have been several cases, around the United States, sometimes involving violent assaults on their owners, where the animals have been stolen. In January, a woman in San Francisco was attacked at gunpoint by three men who escaped with her five-month-old puppy.