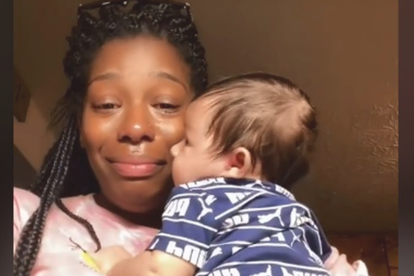 A young mom shared a desperate cry for help and friendship in a now-viral TikTok clip. In the video, the young mother of three describes how she had given birth and is now suffering from postpartum depression – something that is not often addressed when it comes to motherhood and welcoming a baby into the world.

Juana Witty, a 28-year-old woman from Kentucky in the US, has left many people in tears after she took to TikTok with a heartbreaking clip. While giving birth is always a cause for celebration, not everyone is aware of what can go wrong behind the scenes and Witty recently gave us a close-up.

Taking to the app, Witty shared a video of herself holding her little baby while in complete tears. According to her, she was diagnosed with postpartum depression and watching over three children — aged nine, two and three months — has taken a toll on her emotions.

“Postpartum depression is real. I didn’t know I had it. But I could use some friends,” she can be heard saying while tears streamed down her face.

Juanita Witty: Many hearts break after hearing her plight

“People were commenting and telling me that they’re there for me and if I need anything to call them,” she said.

Help is one tearful video away

While she was being showered with words of comfort and support on TikTok, some mothers took things a step further. Soon a Facebook page called “Motherly Support” was born to help Witty and other moms in her position.

Also according to Dr Bavi:

“The birth of a baby can trigger a range of powerful emotions, from excitement and joy to fear and anxiety. It can also result in depression.

ALSO READ: Five exercises you can still do while you’re pregnant