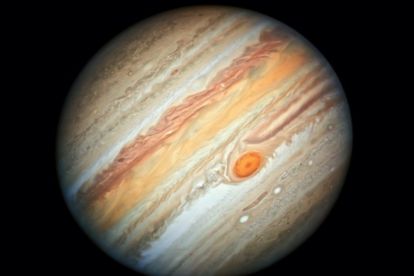 Stargazers were treated to a spectacle in the evening sky as Jupiter reached its closest distance with with Earth since 1963 on Monday 26 September 2022. Image via Twitter @NASA

Stargazers were treated to a spectacle in the evening sky as Jupiter reached its closest distance with with Earth since 1963 on Monday 26 September 2022. Image via Twitter @NASA

Stargazers and astronomy geeks were excited to see Earth’s closest brush with Jupiter on Monday 26 September 2022. If you saw an extra bright white star in the sky last night, you may have been looking at the biggest planet in Earth’s solar system, Jupiter.

According to CNN, NASA announced the event the weekend before. Jupiter was at opposition, according to NASA, meaning Earth was be directly between the gas giant and the sun.

The publication reports that NASA originally said Jupiter would be making its closest approach to Earth in 70 years, but has since corrected this statement, chalking it up to an error.

Jupiter, king of the solar system

During Monday evening’s encounter, Earth was 590.6 million kilometres from Jupiter, according to NASA. The planet’s furthest point from Earth is 965.6 million kilometres away from Earth. Being the largest planet in our solar system near its outer limits, astronomers believe the planet protects Earth from larger asteroids and space debris.

If you believe the planets affect your personality, Jupiter is known in astrology as a planet that represents wisdom and abundance as Vice reports. For those whose star sign is Libra, the planet brings emotional and spiritual expansion through good deeds.

According to Science Alert, Jupiter’s distance from the Sun shrinks to just 740 million kilometres, every 12 Earth years. From this distance, earthlings can view the “king of the planets” as a large glowing orb in the evening sky.

The large planet made its way to its shortest distance from the Sun, which it is estimated to reach on 20 January 2023, according to EarthSky.