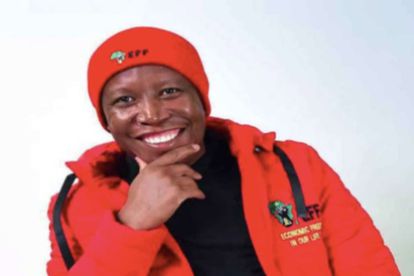 Who would have thought that Economic Freedom Fighters (EFF) leader Julius Malema would take to modelling? We suppose the excitement of launching the EFF Online Merchandise Store is enough to get the blood pumping.

If you haven’t yet seen the images of Juju putting his best foot forward and striking his best pose, then you’ve been missing out. Who says you can’t be an activist and a model, anyway?

Here, Malema can be seen looking utterly delightful, smiling for the camera. He looks calm as ever and even slightly nervous but nevertheless, he musters up what it takes to make the EFF merchandise shine.

Shivambu can also be seen smiling awkwardly. The images taken from the EFF Online website, showcase the merchandise on the leaders themselves. At the time of publishing, an EFF beanie, a bomber jacket and tracksuit pants could be bought online. The jacket, priced at R850, has already been marked as “out of stock” since the official launch which took place just last Friday 10 July.

If you’re wondering why Malema has been photographed in front of a white background as though in a studio for a magazine cover, its because the party launched its EFF Online Merchandise Store.

According to the party, the initiative which was pioneered by talented young black professionals, is the first of its kind in the political arena.

“[It’s] part of the modernisation of the EFF as we all accustom ourselves to the realities of social distancing and technological development,” it said in a statement.

“The EFF Online Merchandise Store is a sophisticated and easy to use system that allows EFF members, supporters and followers to purchase EFF regalia through an online system and have their merchandise delivered right at their doorstep,” it added.

According to the fighters and Malema, the platform has easy to use prompts where individuals can create their own profile, browse through the EFF catalogue of regalia, choose the items they wish to purchase and add it to a virtual cart. All items are secured through payments which can be made via debit card, credit card or Instant EFT.

“Once payment is finalised, we will interact with individuals using the details they have provided in their virtual profile to finalise the delivery of purchased items. There is also the option to collect directly at the EFF warehouse in Johannesburg, Gauteng,” it added.