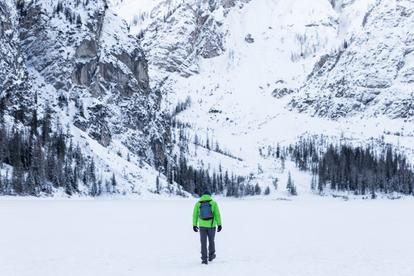 A South African man Johan Nel is one of the millions who have fled Ukraine in the last few days as the Russian invasion – which has now been termed a war on Ukraine – continues. Johan, originally from Strand in Cape Town, shares that he started to hatch his escape plan shortly after military strikes started in the area where he lived.

Unfortunately for Nel, who is an English teacher, things didn’t go as planned and so he found himself walking for over 300 kilometers to safety.

“I simply had to flee, I had no other choice,” the 25-year-old Strand resident told Weekend Argus detailing his five days to walk from the Polish border to the Slovakian border.

According to Nel, he made the decision to leave his apartment in the capital city of Kyiv three days after military strikes began in the area.

And so after calling his mom, he hired a private taxi which cost him around $1 000 (more than R15000) to take him to the Polish border so he could flee to Poland. Unfortunately, it wasn’t as easy as he thought.

“When I arrived, it was a total sh*t show,” he tells the publication.

ALSO READ: Russian soldier in tears as Ukrainians feed and help him to video call mom

Nel says that officials at the border were only allowing Ukrainian women and children into Poland leaving him completely clueless about what to do next.

And so he did the unthinkable – decided to walk from the Polish border to the Slovakian border. This too was a tough decision especially after Ukrainian officials thought he was a native Russian.

Once the questioning was over, Nel began his journey through heaps of snow and freezing cold weather. He also recalls helping many people along the way and carrying a few other people’s heavy bags.

“Along the way I carried the bags of other civilians, my back was f**ked,” he said adding that his feet and hands were “full of blisters” and “beyond numb”.

A test of humanity

“You would think that in circumstances like this you would worry about yourself and no one but yourself. But as you pass old men and women, single moms and children that need serious help and you simply cannot ignore that.”

After 120 hours of grueling circumstances, he arrived at the Slovakian border, where he was offered a warm meal and hot shower by a South African man who is married to a Hungarian national in Budapest.

He then took a train to Amsterdam and plans on flying to Johannesburg to see his brother.

He says that he will soon be returning to Cape Town where he will meet up with the rest of his worried but relieved family.