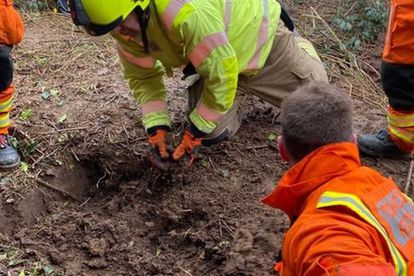 Watch! You’ve got to see these amazing animal rescue missions to believe it. Image: Supplied/ Leicestershire Fire and Rescue Service

Watch! You’ve got to see these amazing animal rescue missions to believe it. Image: Supplied/ Leicestershire Fire and Rescue Service

Watch what happens when Icicle the cat finds itself trapped in life-threatening flood.

Icicle the cat recently had a nightmare experience when the kitty was found minutes away from drowning in flood water, as reported by Birmingham Live.

The cat attempted to claw his way up the river bank river in Norfolk and was hanging on for dear life when disaster struck and he lost his grip. Rivers across England flooded due to Storm Franklin causing heavy rain and flooding.

Some say cats have nine lives, but little Icicle could sure thank his lucky stars lifeboat crews from RNLI (Royal National Lifeboat Institution – a charity that saves lives at sea) came across saved him from the ice cold water.

The video shot by crew on the lifeboat, captures the amazing rescue. Watch!

Once plucked to safety, the drenched and cold kitty was wrapped in blankets and warmed up. The Telegraph reports that afterwards, Icicle was handed over to the Gorleston Coastguard. He was then taken to the RSPCA shelter and treated to salmon from a local fish shop.

Icicle since been reunited with his owners.

According to SkyNews, a dog got stuck in an underground badger’s sett for more than 60 hours. Yes, 60 hours, how crazy!

Firefighters got called to Diamond Jubilee Wood in Normanton Le Heath, Leicestershire, to rescue the dog. It was, according to its owner, trapped for two-and-ahalf days. To make sure the the dog got rescued safely, the firefighters used specialist listening and locating devices. The RSPCA also went to the scene.

Pictures from Leicestershire Fire and Rescue Service show the dog’s head emerging from the dirt and the animal lying sprawled on the ground after being freed.

The badger’s sett is believed to be non-active and the dog was safely reunited with its owner. Badger setts consist of a network of underground tunnels with different entrances. Setts can span for several hundred metres.