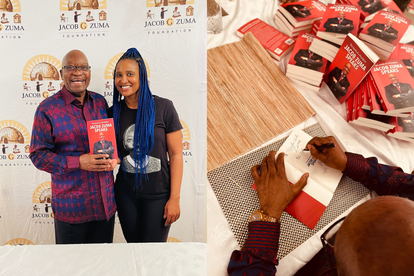 Jacob Zuma’s tell-all release has sold out according to his daughter. Image: Twitter/ @DZumaSambudla

Jacob Zuma’s tell-all release has sold out according to his daughter. Image: Twitter/ @DZumaSambudla

Jacob Zuma’s long anticipated book is officially sold out according to his daughter Duduzile Zuma-Sambudla. It seems as if Mzansi was eager to see which files Msholozi would drop in his tell-all release.

Taking to social media the ex-president’s daughter Duduzile Zuma-Sambudla confirmed that the book had sold out, calling for disappointed buyers to have patience.

“We Apologise. We Are Out Of Stock. Some Book Shops Are Calling For The Book. We Have Pre-orders For Over 2000. Please Be Patient With Us.”

Manyi confirmed that a copy of the book, personally signed by the ex-president himself, is fetching R1000 a copy. Additionally, a normal copy was selling for just under R300 before stocks ran dry.

Furthermore, Manyi claims that the book is selling like ‘hot cakes’ and that the proceeds will go towards paying the embattled politician’s legal fees.

Meanwhile, Zuma-Sambudla hints that this book is the first of many during the virtual launch.

“I want to let SA know this is going to be the first of many books my dad is going to be writing, and involved in. The book that you are all waiting for will be coming soon,”

Previously, the former president said the book aims to address just a few of the ‘untrue’ stories about him according to TimesLIVE.

Additionally, Zuma highlighted the importance of South Africa knowing the truth about the man who once led the nation.

“The untruth about the work we have done demonstrated the truth is important for society to be well informed, to know what is happening. There is no use to create stories because you have powerful machinery to do so.”