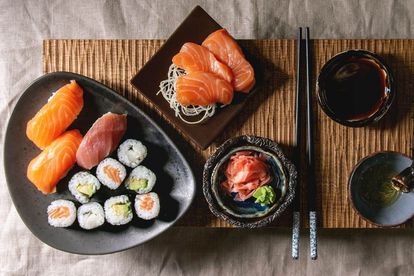 International Sushi Day was founded by Chris DeMay to celebrate the wonder of the traditional Japanese meal. In less than two decades, the wonder that is known as sushi had taken the world by storm.

To that end, International Sushi Day celebrates the delicious meal and seeks to raise awareness about the truths and fictions surrounding it. It may seem simple – it’s just raw fish and rice, right? – but it’s way more complex than that.

International Sushi Day is your opportunity to explore this cuisine and all it has to offer. Who knows, it might be your next comfort food.

The origins can be traced back to South East Asia. It was initially developed as a method of storing and preserving fish to be consumed at a later stage.

The ‘narezushi’ was stored by wrapping it in salted and fermented rice. The rice kept it fresh for months.

When it was time to eat the narezushi, the rice would be discarded, and only the fish would be consumed.

It was around 1600 and 1800 AD that the traditional form of sushi as we know and love it today came into existence.

How to eat sushi

According to Lisa Hong, the right way to eat sushi is to pick it up with your hands, not chopsticks. The chef spent a lot of time and effort in shaping the sushi, and chopstick will ruin the shape.

The only things that you’re supposed to pick up with chopsticks are the ginger and sashimi.

Next, tilt the sushi fish-down into some soy sauce; apply just a hint to the fish only. The soy sauce should never touch the rice. Now you are ready for the bite.

Place the sushi fish-down on your tongue to get the full flavour. Eat the entire piece in one go, don’t split it in half as that is considered rude to the chef.

Rules that everyone loves to break

Don’t use too much soy sauce

There’s no need to drown your sushi in soy sauce, yet so many of us do. Sushi is supposed to be about the interaction of the vinegared rice, the fish and the soy sauce.

If you use too much soy sauce, you won’t be able to appreciate the delicate balance between the fragrant rice and the fish.

Don’t put the ginger in the soy sauce

The pickled ginger you get with your sushi is meant to serve as a palette cleanser between the different types of fish. Think of the ginger as jump-starting your mouth so that your palette is fresh for the next bite.

However, according to Sushi Master Jiro, you can use the ginger to apply soy sauce. Use a piece of ginger as a brush, but don’t eat the soy-soaked piece:

“If, by chance, the sushi chef has neglected to brush nikiri shoyu on your sushi, pick up a small amount of shoga (pickled ginger) to use as a substitute for the brush. Soak it in soy sauce, and then brush it across the top of the sushi topping. It is next to impossible to pick up sushi to dip into soy sauce.”

Many of use – yes, yours truly included – loves to mix a clump of wasabi into the soy sauce. This is actually a big no-no.

If you want to add wasabi, you should put a dob on the fish, so that the flavour remains separate. The chef already adds wasabi to the sushi, and it’s considered rude to mess with that balance.

As we’ve mentioned earlier, put the entire piece in your mouth; just one bite. Don’t break it into smaller pieces. This is to ensure you get the full impact of the flavour when you place it on your tongue.

Start with the lighter sushi first

Always start with lighter fish first and work your way towards oily fish. This is because the oily fish fat will coat your mouth and mess with the delicate balance of lighter sushi.

Food critic Masuhiro Yamamoto describes eating sushi as a concerto. He says the order is important and adds: “When I ate [at Jiro’s,] I felt like I was listening to music.”

These may seem strict, and master Jiro says it used to annoy him when people didn’t respect the rules. However, he adds:

“I used to get mad. But now that I am over seventy, I try not to mind. It’s not good for my heart. Nigiri is for the people.”

Lastly, I recommend watching Jiro Dreams of Sushi. It’s one of my all-time favourite documentaries. It follows the life of Jiro Ono, an 85-year-old sushi master who owns a 10-seater sushi-only restaurant in Tokyo.

If you would ever like to experience the traditional Japanese meal like only can Jiro can prepare it, start saving now. He offers a feast consisting of 20 courses for a minimum of $270, approximately R4 000.