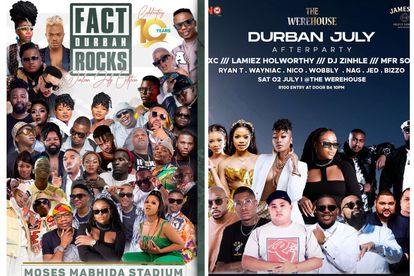 Durban July after-parties are in full swing this weekend.
Image via Twitter

Durban July after-parties are in full swing this weekend.
Image via Twitter

It’s officially the Durban July weekend – and time to dress up, show up and show off and the horse racing and fashion event of the year.

The glamorous event – now under the sponsorship of Hollywoodbets – will be taking place on Saturday 2 July at the Greyville Racecourse.

But the party doesn’t stop after the sun goes down – there are several official Durban July after-parties for more fun to be had in the city.

Here are our Top 5 picks…

Afrotainment boss DJ Tira will host the mother of all Durban July after-parties at the Moses Mabhida Stadium from 17:00 to 05:00 on Sunday.

The event features two stages and a variety of performances, including the likes of Themba, DJ Zinhle, Somizi, Big Zulu, and many more.

Tickets can be booked via Ticketpro.

Show Me The Money – Rich Durban

One of Durban’s premier night spots – Rich Champagne and Cigar Lounge – will host a three-day event featuring the likes of DJ Tira, AKA, Sithelo Shozi, Thuli Phongolo, and many more.

SA’s flashiest star Andile Mpisane will headline the event at the Durban club making a return to the nightlife scene.

Durban’s hottest club The Werehouse is hosting a “takeover” from 30 June – 2 July featuring some of the biggest acts in SA like DJ Zinhle, Lamiez Holworthy, AKA, DJ Tira, and many more.

Tickets available via WebTickets or via the door.