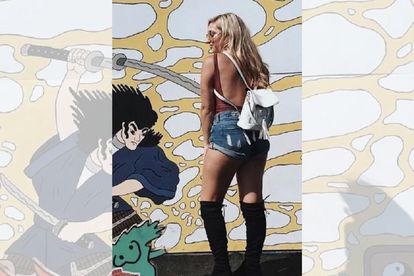 Warmer weather is finally here and so are skimpy shorts. But for one TikTok user, this experience landed her in the ICU and almost at death’s door…

A woman by the name of Sam recounted her harrowing experience on the social media platform in a video that went viral.

‘I WENT INTO SEPTIC SHOCK’

Sam, from North Carolina claims the ordeal occurred after she wore a figure-hugging pair of shorts, that caused her to develop a wedgie, and ultimately a life-threatening infection.

The blonde woman claimed that she wore the uncomfortable clothes on a date that lasted several hours.

She told Buzzfeed of the viral TikTok video: “I chose to ignore it and just enjoy my time. The next day, I felt very sore and then started feeling ill — just not 100%. That night, I noticed that I had a large bump where the chafing had occurred, and as time went on, it started becoming more painful. The pain was isolated to one spot and it felt like a throbbing, stabbing pain.”

Over time, the wound led to septic shock and cellulitis and a warning from doctors that they may have to “cut off” the infected area.

“The very next morning, I was in septic shock and rushed to the ER by my mom. I was shivering, very breathless, could not walk and had extreme body aches. They admitted me to the ICU, and that’s when I realized this was a bit more serious than I had anticipated.

“I was in the ICU for almost four days, where the doctors were debating debridement surgery (basically, cutting off the part of my butt that was infected).”

Luckily for the woman, she did not have to endure surgery but did face the embarrassment of going viral over unflattering pics of her butt!

Also read: Who is Riyaz Aly? Five things to know about the TikTok sensation [watch]

Meanwhile a plastic surgeon has warned the public – and in particular men – of the health risks associated with sleeping naked in a gruesome video which has gone viral on TikTok.

In the video titled: “Why You Should Never Sleep Without Underpants”, Dr Anthony Youn claims that passing gas in your sleep could result in fecal material being spread on your bed sheets, and infecting your reproductive organs.

“This is why you should never sleep naked. The average person gasses 15 to 25 times a day, and this can happen while you sleep.

“A scientific study has shown that every time you let gas through, you spray a small amount of fecal material. This is true.

“And the same study shows that your penises will catch all these particles. So for the sake of your bed partner, please sleep with your underwear on.”