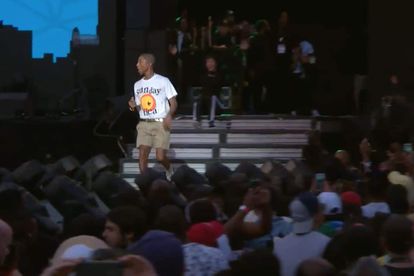 The Global Citizen been organised to bring us all together, and it’s already achieved some amazing things – just take the billions of dollars that were pledged to worth causes throughout Sunday. However, it turns out the most polarising event of the day has come from the wardrobe of Pharrell Williams.

The legendary music producer may not look like a 45-year-old, but he most certainly dresses like one. He took to the stage and produced an entertaining set. But Pharrell, come on mate, have a word with your stylist would you?

Pharrell Williams roasted for his clothes

He’s got his takkies, high-white socks and beige cargo pants. The holy trinity of fashion faux-pas. His shorts, pulled up above his belly-button, just about complete a rather comical look. His white t-shirt isn’t necessarily bad, but the damage has been done from the waist down.

Hey, this isn’t just us having a good bitch. We’re totally fine with his style choices. But the rest of Mzansi – and our Twitter community – didn’t feel like letting him off the hook lightly. There were no Blurred Lines here…

Pharrell is wearing bring back the land shorts. Did Casper have something to do with this ????????#GlobalCitizensFestivalSA

Pharrell dressed up like a Boer Farmer. I dnt get his 'swag' lately #GlobalCitizenFestivalSA

With land expropriation such a hot-button issue in South Africa, perhaps it was only right that Pharrell Williams went for the “casual farmer” look. Regardless of his dress sense, the Happy hit-maker brought the house down in Johannesburg.

His energetic performance – which might have seen more running and dancing than actual singing – lit a fire underneath the crowd, energising them for the evening ahead. Beyonce and Jay-Z are due to close the Global Citizen Festival when their set begins at 21:30.