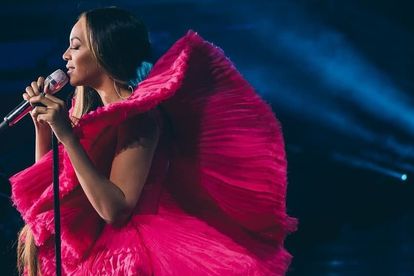 The world-renowned show stopper and formidable queen, Beyoncè, did what she does best at the Global Citizen Festival on Sunday, 2 December.

The whole world was behind the Global Citizen initiative, which is aimed at bringing to the spotlight, social ills that affect the majority.

However, the main event at FNB Stadium, in Johannesburg, was Beyoncè Knowles-Carter, the wife of Hip-Hop extraordinaire, Jay-Z.

She came, she saw, she conquered, and as ever her legion of supporters, the Beyhive, were screaming off the top of their lungs in their thousands, as the Houston native singer ran through her illustrious discography.

One of the stand-out occasions of her appearance at the festival were the different signature outfits she came out in, ranging from designers such as Versace to her outro dress by Mary Katrantzou.

Let’s take a closer look at each outfit that Beyoncè wore at the Global Citizen Festival.

This is the badass yellow jumpsuit Beyoncè wore with her group of dancers, designed by Versace for the Global Citizen Festival.

#Beyoncé and her dancers in custom @versace #Mandela100 #GlobalCitizenFestivalSA

This is the outfit Beyoncè adorned for the last part of her performance, where in the end, she and her stood side-by-side to bid farewell to South Africa.

The cape and bodysuit features all 54 of Africa’s countries.

#Beyoncé in custom @marykatrantzou cape and bodysuit which features all 54 of Africa's countries. #Mandela100 #GlobalCitizenFestivalSA

It is safe to say that this is the moment that stole the hearts of the millions of people that were tuned into the Global Citizen Festival.

Read – Global Citizen Festival: Six of the most expensive pledges made so far

Beyoncè came out draped in a lush pink Ashi Studio SS18 gown that shone like crystals under the strobes of light that hit her. She looked nothing short of an angel.

If this does not officiate her as the HBIC of music, then we do not know what it is that you want. This is a Balmain custom thread.