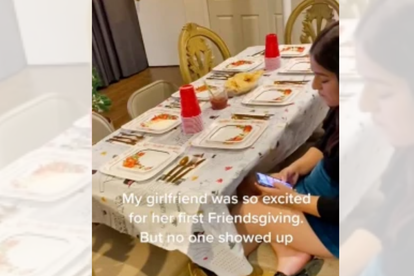 This poor lady’s Friendsgiving was ruined. Image via TikTok: @kidalloy

This poor lady’s Friendsgiving was ruined. Image via TikTok: @kidalloy

A young woman was left heartbroken after planning a big Friendsgiving dinner party and no one showed up. Her boyfriend who witnessed the big flop, shared a video of her on TikTok sitting sadly by her set table waiting for people to come. According to his clip, no one showed up or sent messages to explain their absence.

Friendsgiving flop as friends decide to ditch the dinner

A young woman called Maryann and her boyfriend Christian Zamora have gone viral on TikTok. This was after the young woman decided to have a Friendsgiving dinner for all her buddies.

In a clip shared on the app, Christian explains how everyone confirmed that they would be there but ended up not pitching on the day of the dinner. This resulted in the young woman sitting sadly by the table that she spent a lot of time decorating for her friends.

“My girlfriend was so excited for her first Friendsgiving but no one showed up,” he wrote in the clip, as the camera showed a distraught Maryann sitting at the table on her own.

“She decorated the whole basement and cooked so much food. I keep trying to cheer her up but nothing is working.”

The video did however have a happy ending as Christian explained how he called some of his buddies instead. According to him, many people showed up and even brought some food and gifts.

“They were more than gracious enough to come. They all came and brought stuff. It’s like she had her own Friendsgiving, there was a happy ending to it,” he explained.

Maryann also shared that she has since made the decision to unfriend all of the inconsiderate people who did not even have the decency to let her know.