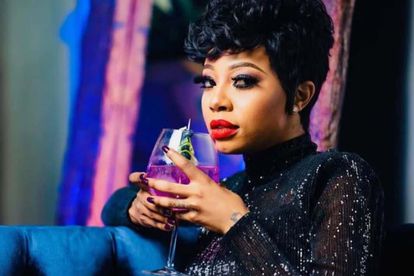 Kelly Khumalo in one of the publicity pics for her Controversy Gin which has received a gold award recently. Image: Supplied

Kelly Khumalo in one of the publicity pics for her Controversy Gin which has received a gold award recently. Image: Supplied

Kelly’s gin, that was released earlier this year, walked away with a gold award. The Controversy Gin is said to be a locally produced premium six-times distilled superior quality gin infused with a perfect balance of eight botanical ingredients that “dare to bring out the untamed side of life”.

Kelly took to social media to applaud her team for the achievement with a photo of the award certificate. She also announced that Controversy Gin by Kelly Khumalo (that was initially only available at Makro) is also available on Takealot from 24 November.

It seems that this is another win for Kelly who is sitting comfortably in the number one spot in South African music charts in the afro-pop/soul category with Empini.

“This thing I am bathing with seems to be working. No 1 song in SA for the song sixth time,” she announced.

On the topic of controversy

Kelly has been in the center of much controversy over the last couple of weeks. The end of October saw her trending on social media in connection with the Senzo Meyiwa murder.

At the time, The South African reported that a charge sheet, accidentally leaked to the press, revealed that the police now have Kelly listed as somebody who will need to be investigated further.

The bombshell document claimed that Khumalo should be proved over claims that a lender gave her money “to pay for a hitman”. The authorities also sat they need to obtain a statement from the person accused of granting her a loan.

Furthermore, the investigating officers have highlighted their concerns over Khumalo’s cellphone records – which indicate she was in contact with the accused who appeared in court on Tuesday. The killing took place at the singer’s mother’s house, and she has rejected all allegations made against her in the past six years.

It has also been reported that Kelly might lose her luxury Porsche that she bought in 2017.

According to Sunday World, Khumalo purchased the luxury SUV back in 2017 however, she has not fulfilled her instalment payments.

“Sunday World can exclusively reveal that Nedbank’s vehicle finance wing, Motor Finance Corporation (MFC), has filed papers in the Joburg High Court for a default judgment against the songbird after she defaulted on payment for her luxury Porsche Cayenne TipTronic vehicle.