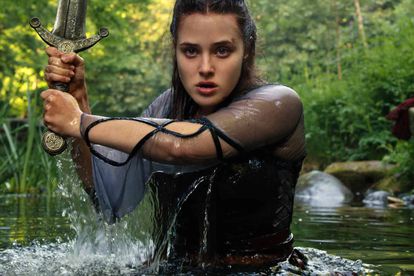 Katherine Langford as Nimue in episode 104 of Cursed, coming to Netflix in July. Image supplied.

Katherine Langford as Nimue in episode 104 of Cursed, coming to Netflix in July. Image supplied.

Winter has arrived, officially. If there was any doubt before — and if COVID-19 couldn’t keep you indoors — the recent snowfall might be enough to convince you to stay indoors this chilly July weekend. But what to do? Netflix, of course!

There’s no need to light a fire to keep you warm because Netflix is bringing the heat. From Charlize Theron’s The Old Guard to Katherine Langford as the Lady of the lake in Cursed, here’s what’s coming to Netflix in July.

New series on Netflix in July

After waking up in a morgue, an orphaned teen discovers she now possesses superpowers as the chosen Halo-Bearer for a secret sect of demon-hunting nuns.

Charlize Theron portrays a warrior named Andy who leads a covert group of tight-knit mercenaries with a mysterious inability to die as they fight to protect the mortal world.

When the team is recruited to take on an emergency mission and their extraordinary abilities are suddenly exposed, it’s up to Andy to help the group eliminate the threat of those who seek to replicate and monetise their power by any means necessary.

Cursed is a re-imagination of the Arthurian legend, told through the eyes of Nimue, a young woman with a mysterious gift who is destined to become the powerful Lady of the Lake.

After her mother’s death, she finds an unexpected partner in Arthur, a humble mercenary, in a quest to find Merlin and deliver an ancient sword.

When a young woman’s murder shows similarities to a decade-old cold case, a new police commander must break the silence permeating an Owl Mountain town.