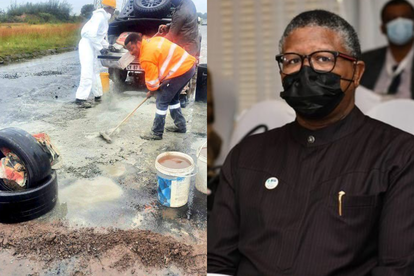 Fikile Mbalula is being dragged over potholes again. Images via Twitter: @kulanicool/@mbalulafikile

Fikile Mbalula is being dragged over potholes again. Images via Twitter: @kulanicool/@mbalulafikile

Many fed-up South Africans have been taking to the streets to tackle a prevailing pothole problem. Years ago, residents relied on the government to take charge but have long since lost confidence in those tasked with keeping the roads in a good condition.

Just recently, one Twitter user shared photos of Saffas busy at work filling giant holes in their streets, and soon enough, Fikile Mbalula was being called out for failing to do his job.

Gone are the days when those in charge of South Africa were held to a certain standard and worked hard to live up to it.

The country’s pothole problem appears to be worsening and residents have had it up to here with promises for a better and brighter tomorrow.

And so many of them have taken to the streets to take matters into their own hands and fix the pothole problem that has been plaguing SA streets.

Taking to Twitter, one user with the handle, @kulanicool, shared snaps of locals taking the much-needed action.

Shortly after that, Fikile Mbalula, the Minister of Transport, was being dragged by Twitter users who shamed him and those who are meant to fix the problem for not taking the necessary steps to curb the country’s pothole problem.

Other Twitter users sadly remarked that Mbalula only responds to celebrities on the app and usually never takes notice of complaints made by ordinary Twitter users who have concerns about the country’s growth.

This comes after the minister previously responded to a message by media personality Anele Mdoda who complained that a pothole nearly swallowed her car.