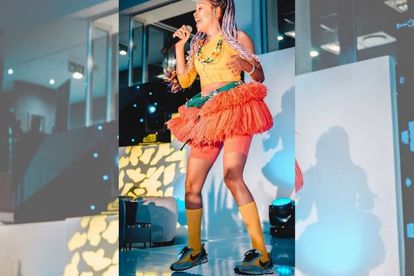 Sho Madjozi — who is known for incorporating her Tsonga culture through her music and public image — informed Daily Sun that she wants to make things easier for moms and dads.

The Kona hitmaker also stated that parents struggle to find pieces of traditional attire for their kids especially around Heritage Day 24 September.

I wanted to make all the outfits, from head to toe, available in one place.

She wants kids to be proud of their culture, feels connected to them, and thinks it’s a great idea for them to explore their culture.

IT’S BEEN A BUMPY ROAD

The media personality also revealed that she’s been working hard on this project from the beginning of the year.

She also menationed that things moved swiftly for her after she found women to make items for the little ones.

We worked really hard to make them affordable and I think I did a good job.

The John Cena hitmaker stated that the most challenging thing for her was collecting all the items as her employees are scattered all over in different places.

She came up with an online store to make the clothes accessible and easier for parents nationwide.

The musician also said an online store made sense as people are used to shopping online and paying a shipping fee.

It’s worth it if you think about the effort that it would take to go and get all the materials to make these things yourself – she said.