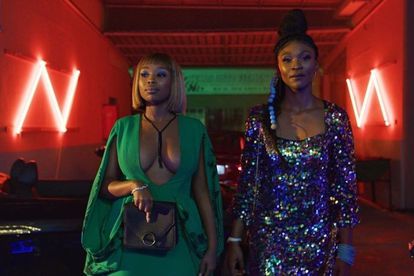 Netflix’s newest South African original, Jiva!, became available to stream late last month and showcases incredible choreography and an outstanding wardrobe to go along with it.

Jiva!‘s wardrobe is a celebration of African dance culture and South African youth culture as a whole.

It beautifully captures popular dance moves and contemporary South African fashion brands, such as Maxhosa and Rich Mnisi, with its picturesque prints.

The dancers in the show remind viewers of how dancers contribute to streetwear and what their stay says about their surroundings, culture and the way they move.

See for yourself: Watch the ‘Jiva!’ trailer

The shows stars Noxolo Dlamini as Ntombi Xaba. Dlamini’s character is always looking her best and uses her style to express herself like she would on the dancefloor.

Mpumi Ntintili is the show’s wardrobe coordinator and she wanted to show international viewers how young people in Durban and South Africa as a whole express themselves in terms of style, as well as how dancers incorporate fashion trends.

“I wanted to showcase how dope our fashion is and how the South Africa youth have a flair for fashion,” Ntintili told IOL.

Ntintili is a stylist by trade which came in handy when she wanted to work with fashion designers for the show.

“I called on relationships I had with designers. I specifically wanted garments that translate great moving pictures. So, brands like MaXhosa Imprint, House of Ole, Ntando, Keletso Moraba, Mmuso Maxwell and Rich Factory.”

The cinematography does well to show the character’s colourful garments and goes hand-in-hand with the effervescent dance moves. Ntintili wanted to cover as many bases of South African style as possible.

The styling of featured characters like Samukelo, played by Given Stuurman, and Makhekhe, played by Ntuthuzelo Grootboom — who form part of the Umlazi Pushers dance crew, is as bright and expressive as the characters themselves.

“I love what we did with the Umlazi Pushers and Makhekhe and the Cats. I wanted to show African fashion, make it urban and everyday wear. The Umlazi Pushers are wearing Imprint, which is a brand that likes to mix and match bold, clashing prints. They represent the Ama2000 (Gen Z) generation, who write their own rules,” Ntintili revealed to IOL.

A number of social media users have commended the stylistic efforts in Jiva! among other things, with some eagerly awaiting a second season.