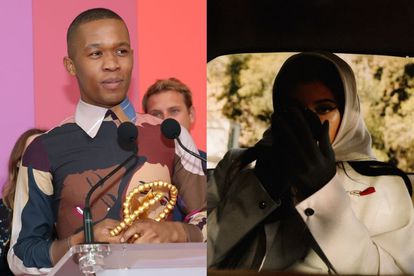 Businesswoman and reality star Kylie Jenner stunned in the celebrated designer’s caped shoulder wool suit from his AW21 collection that debuted at Paris Fashion Week in 2021.

WHO IS THEBE MAGUGU?

Originally from Kimberley in the Northern Cape, Thebe Magugu spread his wings in the fashion industry in Johannesburg. He studied fashion design, fashion photography and fashion media at STADIO (previously known as LISOF).

After interning at several fashion houses, Magugu founded his contemporary fashion brand two years later, specialising in woman’s clothing. His designs are centered around trauma in a “proactive and beautiful way”.

“I tend to look at South Africa through this lens and ask how I can turn all of this pain on its head,” he told Vogue.

He has showcased his fashion collections at the South African and Paris Fashion Weeks. In 2019, Magugu became the first African designer to be awarded the Moët Hennessy Louis Vuitton (LVMH) prize for emerging talent.

Taking to Twitter on Thursday 6 January, Thebe Magugu shared a striking image of Kylie Jenner wearing his caped shoulder wool suit from his AW21 collection. The collection was first presented at Paris Fashion Week in March 2021.

“I was very fascinated by the idea of exploring modernity through the lens of the indigenous,” he told i-D.

“In Western thought, those two terms are usually separated but with African knowledge systems, things are more intersectional; the two ideas coexist.”

Reacting to the post, many extended their congratulations to the celebrated fashion designer. One tweep wrote: “Thebe Magugu has always been a huge deal, but this is HUGE.”

Another wrote: “Seeing a dude from the Northern Cape doing big things like this definitely inspires and shows me that anything is possible.”

“Thebe Magugu is for the world now. Love it!”.