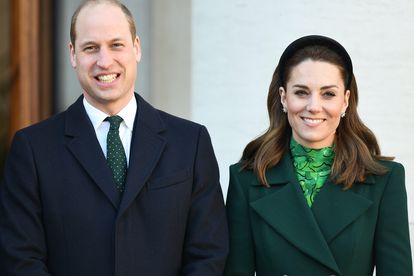 The Duchess of Cambridge wowed in a new daisy-shaped pendant worth £9 000 (R180 171,46) in a romantic anniversary portrait with the Duke released to mark their 10th wedding anniversary.

According to The Daily Mail, Kate Middleton and Prince William are celebrating their wedding anniversary on 29 April 2021 and shared two new snaps taken earlier this week at their home of Kensington Palace to mark the occasion. The mother-of-three added a touch of glamour to her blue outfit with a striking Asprey necklace, which are a new addition to the royal’s jewellery collection – and presumably an anniversary gift from William.

The necklace – called the Daisy Heritage piece – is described as “one of the most iconic of such designs, featuring individually set marquise cut stones as the flower’s petals”. Each is held in place with two perfectly formed V-shaped claws, designed to allow maximum light to pass through the stone. The center of the flower, meanwhile, is set with a half ball of avé diamonds, replicating the texture of the daisy’s center.”

It is said that Kate has been spotted with a matching set of earrings, which she debuted while touring Ireland in 2020.

The royal couple tied the knot at Westminster Abbey in a glorious wedding ceremony back in 2011. Kate wore an Alexander McQueen wedding dress as the nation celebrated her official introduction as a member of the Royal Family.

Since then, it is not uncommon for the mother-of-three to receive jewellery as a present from her husband. When the royals were still at university, Prince William was said to give Kate a personalised ring. The Victorian rose gold band encrusted with pearls and garnets which are the birthstones of the couple.

Express reports that following the birth of their first child, Prince George, Kate reportedly received a diamond eternity ring from Prince William. She often wears the jewel on her wedding ring.

Meanwhile, the most special jewellery of all has to be Kate’s engagement ring. According to The Diamond Store, the sapphire ring that William gave Kate has deep personal meaning for him. It previously belonged to William’s mother, Princess Diana, who died an untimely death in a car crash in August 1997. Prince William said at the time of his engagement that giving the ring to Kate was his way of making sure his mother didn’t miss out on this special occasion.

The ring consists of a 12-carat oval blue sapphire, cut into facets, and surrounded by fourteen solitaire diamonds. The setting is made from 18K white gold.