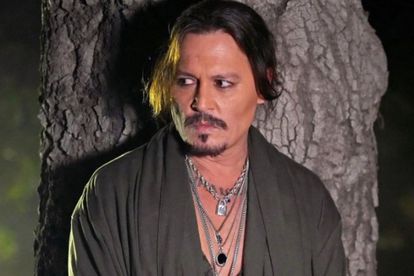 The moment we’ve been waiting for is finally here. Rihanna’s highly anticipated Savage x Fenty show just aired on Amazon Prime video and social media has been going crazy over it. The famous actor and Dior Sauvage brand ambassador made a fashion show appearance at the coveted Savage x Fenty Vol. 4 experience.

The Pirates of the Caribbean actor finally made his fashion show debut as he made a one minute appearance midway through the show rocking layers of his signature necklaces and rings, wearing silk Savage pyjamas and a matching robe making him suave.

“Johnny’s appearance started out with him standing in the middle of a forest, resting his back against a tree, as shirtless male dancers performed around him, before he began walking towards the camera,” according to the Daily Mail.

Depp walked out of the recreated forest with the rap group, Outkast’s song titled ‘So Fresh, So Clean’ playing in the background.

The models were as diverse as ever with an star-studded cast from Taraji P. Henson, Cara Delevigne to Winston Duke.

His appearance ended with him approaching a tree, like little red riding hood lost in the woods. Now that’s the Savage x Fenty experience we want.

“Johnny’s appearance was reportedly already been pre-filmed, and both him and Rihanna were said to be very excited about the collaboration,” according to TMZ.

Depp’s cameo at the Savage x Fenty fashion show came during the time of his romantic split with girlfriend and British lawyer, Joelle Rich.

“Johnny and the privately-educated mother-of-two, 37, supposedly begun seeing each other during his highly publicized court battle with ex wife Amber Heard in Fairfax, Virginia,” said a TMZ source.