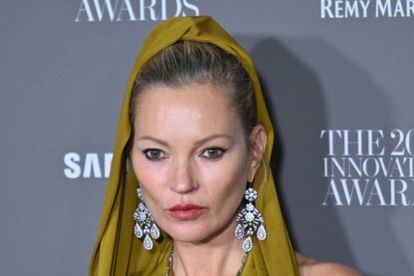 Kate Moss is one of the world’s celebrated 90s supermodel with over 43 British Vogue covers throughout her career. Gracing many ad campaigns from the iconic Calvin Klein denim campaign to Versace alongside bestie, Naomi Campbell.

The supermodel had a speech malfunction at the Wall Street Journal (WSJ) magazine innovators awards.

ALSO READ: ‘I had to say the truth’ – Kate Moss on testifying in Johnny Depp trial

EXCUSE ME KATE MOSS, WHAT DID YOU SAY ?

Footage at the awards ceremony showed a Kate Moss who has been sober for four years, slur her words as she presented an award to Anthony Vaccarello, the designer at the iconic house of Saint Laurent.

The dress featured sexy, elegant hood and a triangle cut-out on the midriff that gave a peek at Kate’s toned stomach, and black bikini-style underwear was visible through the gown.

“At the event, Kate arrived at the podium with a welcome of ‘good evening ladies and gentlemen’, then appeared to forget her words as she took a long pause to check her phone,” according to Daily Mail.

THE PARTY DAYS ARE OVER

There was once a time Kate Moss was a party girl on the scene, jet-setting all over the fashion capitals of the world, from Paris to Milan, rubbing shoulders with designers like the late Karl Lagerfeld and dated actor, Johnny Depp.

The fast paced life led the 90s supermodel into drug and alcohol abuse.

She now launched a wellness brand earlier this year to focus on ‘self-love’.

“When I started to take care of myself, things began to change. They say that self-care is part of self-love. That’s what we all need, that’s what I needed, to follow the Cosmoss,” she told Daily Mail.

“I think I’m the happiest I’ve ever been,” she added.