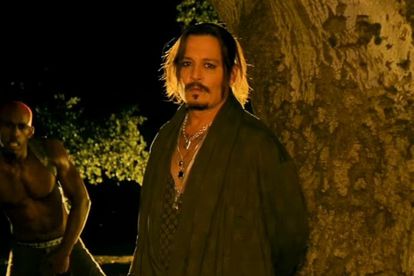 Singer and businesswoman Rihanna’s highly anticipated Savage x Fenty Vol. 4 show experience, which aired on Amazon Prime video on Wednesday 9 November, was a hit success among viewers. The appearance of the show’s biggest guest star, Johnny Depp, got everyone talking.

The famous actor and face of Dior Sauvage fragrance made his Savage X Fenty debut wearing green pyjamas and a matching silk robe. His signature necklaces and rings were also spotted while walking in the “enchanted forest” with rap group Outkast’s  So Fresh, So Clean soundtrack playing in the background.

The Twitter streets were divided over the Pirates of the Caribbean star’s guest star appearance at the Savage X Fenty show experience. Some Tweets were living for Johnny Depp’s long awaited strut on the unusual runway and some were just bashing him for appearing in the first place.

“The internet was split, as some people were glad to see Johnny Depp, while some were not so happy. Depp was accused of domestic abuse in 2016 by ex-wife Amber Heard and recently won a defamation suit against her which led to a mixed reaction on the internet,” according to EWN.

STARS STRUT THE RUNWAY FOR RIRI

When Rihanna calls, celebrities are more than eager to do anything for the Lift Me Up hit-maker and billionaire.

The show/experience was filled with a massive list of celebs from Taraji P Henson, Winston Duke, Emmy winner Sheryl Lee Ralph and Maxwell who serenaded the models as he sand his classic hit song ‘Whenever Wherever Whatever’ wearing a silvery silk robe.

The time of the normal fashion shows are gone. Rihanna is raising the bar with an experience rather than a show. Kudos to you, Riri!