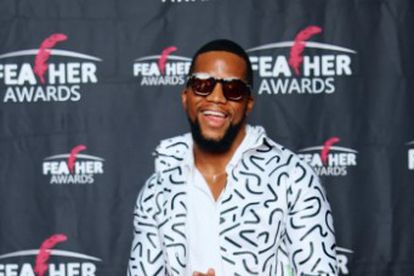 The red carpet fashion at this year’s 14th Feather Awards left us with mixed feelings…From Thami Dish dressing up as a killer bride to Candice Modiselle being ushered on a throne by a group of half-naked men!

Fashion wasn’t really giving us great moments at this year’s Feather Awards which was held on 10 November at the Market Theatre, in Johannesburg. Certain people came dressed as if they were going to the mall and some just didn’t make any effort. It’s the Feather Awards, step it up!

Nonetheless, here’s our best dressed list for this year.

Beloved actress, Nambitha Ben-Mazwi took a risque approach with a charcoal sequined dress that left rather little to the imagination (in a good way though!). She served us cleavage and legs with a plunging neckline and high slits. She took home the Hot Chick of the Year award. Hot chick, hot dress!

The actress and Unpacked talk show host, opted for a Hollywood glamour approach with her fuchsia dress.

The Feather Awards’ Hunk of the Year, Muvhango actor Senzo Radebe, attended dripping in a striking Urban Zulu ensemble. A look fit for a hunk indeed!

We think reality star and stylist Mome Mahlangu took the name of the awards literally. It’s the Feather Awards, not pluck every bird’s feathers.

Killer bride or just plain crazy bride? The answer is both. The organiser of the awards wore a hideous bridal outfit. We know it’s a gay affair, but some fashion sense would have been nice, Thami.