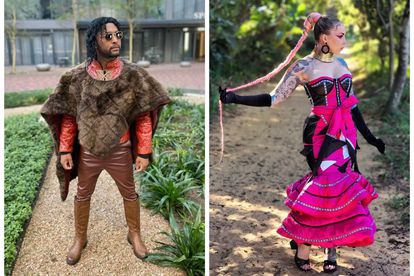 Vusi Nova and Jojo Robinson landed on the worst dressed list at the Durban July.
Image via Instagram
@vusinova1/
@mrs.jojo.robinson

Vusi Nova and Jojo Robinson landed on the worst dressed list at the Durban July.
Image via Instagram
@vusinova1/
@mrs.jojo.robinson

The Hollywoodbets Durban July has come and gone and with it a number of celebrity fashion looks that had the social media timeline in a tizz.

But clearly, not everyone got the memo for the “Show Me the Honey” dress code…

FIVE CELEBS WHO MISSED THE MARK AT THE DURBAN JULY

Singer Vusi Nova – or Snova – appeared to step out of a different century in his caveman-chic look.

The Real Housewives star may have had the advantage of being on home turf – but clearly missed the memo at the Durban July.

The media personality rocked a dress that paid homage to Orlando Pirates‘ 85th anniversary – which had soccer fans in elation – but sadly didn’t make sense at the Durban July.

Did Andile Mpisane’s bestie forget half his Durban July outfit at home?

DJ Tira may have looked like money in his bespoke Ole Ledimo – especially after landing at the Durban July in a helicopter – but his look did not get the reception he hoped for.

In fact, many tweeps compared his look to a bottle of methylated spirits!