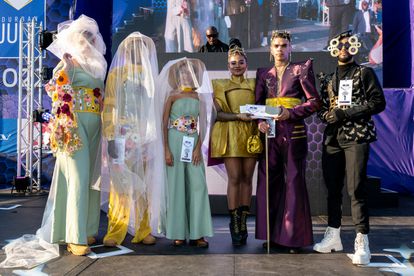 After a two year absence, the Raceday Fashion Awards attracted huge interest as hundreds entered the various categories hoping for raceday glory at the 2022 Hollywoodbets Durban July on Saturday.

The highlight of the raceday fashion programme was Makhosazane Ntshangase who returned to win the Classic Racewear Women category, repeating her win in 2019.

Ntshangase wasn’t done as she also took home the third prize in the same category.

“It’s incredible for me to come back and win again after 2019,” Ntshangase said with a smile.

“It was a lot of work and I put in a lot of extra work on the fascinator that was on the winning garment which is great.

“I think next year I’ll give someone else a chance!” she added with a laugh.

In the Raceday Hat or Fascinator category it was Rutendo Dyirakumunda who was crowned the winner.

This year was the 126th edition of the Hollywoodbets Durban July

“I am incredibly happy to win this award,” Dyirakumunda said.

“It means so much to me after all the work that I put into creating it and it’s a huge blessing for me.”

In the Classic Racewear for Men Sipho Mugazi took home first place with his creation that was modeled by Qurin.

In the prestigious Most Striking Couple category Brenda Waring and Pamela Shabane were crowned the winning designers for their creation that was worn by Shabane herself and Kent Hollenberg.

Makaula and Van Heerden were responsible for the design of the outfits.

Third went to Leona Adams for her creation modeled by Denelle Ince and Josh Jacobs.