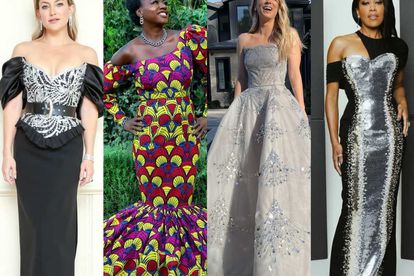 The 78th annual Golden Globes ceremony on Sunday was a largely virtual event, with stars taking to the red carpet from their living rooms.

Although a few celebrities attended the actual event held at both the Rainbow Room in New York City and the Beverly Hilton in Los Angeles, most chose to stay safe at home by joining virtually.

However, the stars did not dress for comfort: They went all out to serve killer looks from home. Here’s our pick of the seven best-dressed celebrities of the night.

She watched the Golden Globes from her living room with her family.

The How To Get Away With Murder actress was styled by celebrity stylist Elizabeth Stewart. Davis wore a dress from Claude Kameni’s latest collection, which is inspired by African royalty. The dress was created from vibrant fabric from Cameroon, where Kameni was born.

The Best Performance by an Actress in a Television Series nominee was red-carpet ready in her Oscar de la Renta princess dress.

Although she did not win, she still popped the champagne as if she had. Cuoco even had her own little Golden Globes afterparty at home.

Stylist Karla Welch posted a snap of Paulson in her Prada with the caption:

2021was the first time in Golden Globe history that more than one woman was nominated for the Best Director Motion Picture award. Regina King, alongside Emerald Fennell and Chloe Zhao were the three female nominees.

King, who was nominated for directing One Night in Miami, wore a sparkling Louis Vuitton dress with silver sequins in front.

She said felt like a “bottle of champagne” in the high-fashion dress.

The British actress wore an edgy cherry frock by Molly Goddard, which she paired with black combat boots. The look saw her staying true to villainous character Marla Grayson in Netflix’s new film I Care A Lot. Pike won Best Actress in a Motion Picture, Comedy or Musical, for this lead performance.

Collins even caught the “golden hour” for her pre-awards outdoor photoshoot.