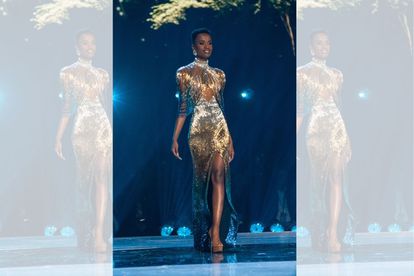 A collection of glamorous gowns worn by South African celebrities such as the longest-reigning Miss Universe, Zozibini Tunzi and Miss World 2014, Rolene Strauss, is now on show as part of the #BespokeByBiji exhibition at The Diamond Walk in Sandton City, Johannesburg.

According to TimesLive, one of the highlights of this exhibit is the gown designed for Zozi’s crowning moment as Miss Universe in 2019.

The gown was designed by local designer Birgit Gibbs (or Biji as she’s known professionally known) who has been in the fashion industry since 1990.

Of the award-winning ‘Sunrise Ocean Dress’, Zozi said at the time: “[This] dress symbolises where I come from; it represents the brown of the sand and the blue of the ocean. I feel like I have South Africa with me on the stage.”

The dress is said to be the main attraction at the exhibit that will run until 6 June 2021.

She also created the striking dress Zozi wore in her final moments as the reigning Miss Universe at the pageant’s finale on Sunday, 16 May 2021.

It is reported that Rolene Strauss’ red dress that she wore when she handed over her Miss World crown, will also be on display.

Also on display is the Xhosa-inspired evening dress she created for Thulisa Keyi to wear while representing Mzansi on the Miss World stage in 2018.

Boity Thulo’s blue dress that she wore in a campaign promoting her hair care range will also be displayed, while Natasha Joubert’s gown that she wore at the 2021 Miss Universe is also free to see at the exhibit.