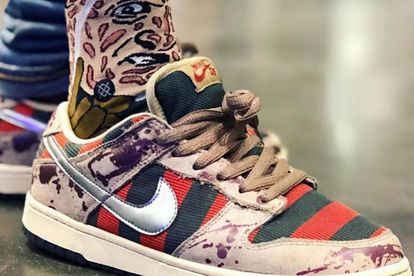 From horror film to Cinderalla scenario: Newly surfaced CCTV footage shows the faces of six robbers who stole one shoe of a pair of rare Nike Freddy Krueger sneakers from a sneaker store in Johannesburg back in November 2018. The video was released on YouTube on 7 June.

The sneakers are currently estimated to be worth R350 000, and the owner of original pair, tennis coach Brandon Ebersey, is still searching for its mate after all these years.

The robbery took place at Court Order in Rosebank, Johannesburg, on 27 November 2018, and the resurfacing of the CCTV footage from the store on the day could open up the investigation again.

Two men entered the sneaker store and proceeded to look around while another two men entered. Suddenly, one of them pulled out a gun and they then pushed the store owner into the backroom of the store where employees are seen washing shoes.

The employees are told to drop to the ground and put their hands in the air. One of the robbers then ties them up with cable ties while another robber comes into the store and goes upstairs where he is seen, along with another robber throwing hundreds of shoes into plastic bags.

This robbery case was closed after police said that they could not find the culprits. However, investigators only recently accessed the footage from a hard drive that was previously overlooked.

In addition, a Sandton-based company that specialises in cyber forensics called Basileus Consilium Professional Services (BCPS), has joined the investigation.

Among the hundreds of stolen sneakers was one half of the most rare sneakers in the world. A horror-film inspired sneaker based on the sweater worn by villian Freddy Krueger from the Nightmare on Elm Street movies.

The range of sneakers was produced in 2007. However, production was halted due to the producers of the horror film franchise threatening Nike with legal action over the breach of copyright.

“Nike had to can the manufacturing but by that time they had already sent off some shipments so they had to recall all of them and had to destroy them. They had to build a big pile, throw diesel and burn them,” said BCPS investigator Abel Roman according to Two Oceans Vibe.

“But in the course of that process, a few came out. Nobody knows how many,” he continued.

According to Two Oceans Vibe, Court Order had borrowed the Freddy Krueger SB dunks from tennis coach Brandon Ebersey as part of its opening display. The 27-year-old tennis coach is an avid sneaker collector and bought the sneaker five years ago in a deal with a collector overseas who had them advertised for $3 000 on Instagram which equates to almost R50 000.

“They took high-value sneakers but nowhere near the [value of the] Freddy Kruegers, but they only took one, which makes it worthless. The big mystery is: Where is the sneaker?” said Roman.

The average price of these sneakers now are around $26 000 on StockX which equates to an estimated R350 000.