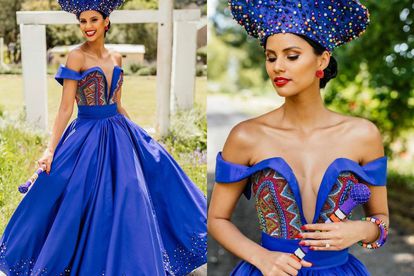 Tamaryn Green was the centre of attention on Sunday 10 October when she shared photos of her umembeso with Ze Nxumalo. She wore a royal blue traditional dress designed by Scalo owner Sello Medupe.

However, her dress sparked a controversy amongst two South African designers. African haute couture designer Bayanda Khathini claimed that Sello stole his design. He then sent Sello a letter of demand to remove the dress from all his social media platforms and any other platform it was shared to.

THE LETTER OF DEMAND

The letter of demand was posted on Instagram but quickly removed after followers seemed to think the accusations were a far stretch.

“Our client discovered this design infringement when former Miss SA, Tamaryn Green, appeared on social media for her umembeso ceremony. As the creator of his (work), our client has a right to copyright protection of which he does not need to register,” read an extract from the letter of demand.

“The protection arises automatically as his work is original and is recorded in a material form,” continued the letter.

The potential dresses were shared on Twitter and Tweeps thought there could not be a copyright to “royal blue and beads”.

Sello responded to the accusations of him “stealing” the dress. A statement released on behalf of Scalo states that Sello’s strength lies in delicate and detailed beading.

“Medupe’s strength lies in delicate and detailed hand beading. Through many garments and collections, he has been able to create uniquely Scalo patterns on various fabrics,” read the statement.

The statement went on to say that Sello stands by all the work he has produced to date… which includes Tamaryn’s umembeso dress.

“This is a talent the designer will continue to explore further in upcoming collections. Medupe takes great pride in, and stands by all the work he has produced to date,” the statement continued.