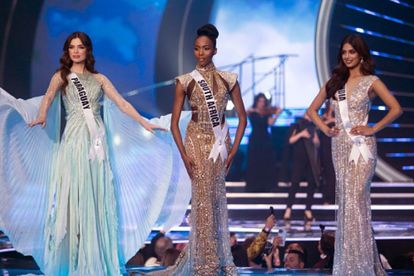 Miss India Harnaaz Sandhu was crowned Miss Universe at the Universe Dome, Port of Eilat in Eilat, Israel on Sunday 12 December. The pageant broadcasted live in South Africa in the early hours of this morning (13 December) due to the time difference. Andrea Meza (Miss Universe 2020) from Mexico presented Harnaaz with the prestigious crown before she took her first walk as Miss Universe 2021.

Miss Paraguay Nadia Ferreira was crowned the first runner-up and Miss South Africa Lalela Mswane, the second runner-up. 80 contestants from around the world competed in the pageant.

There were two sets of presenters for the event:

Lalela Mswane wowed at the pageant and secured a spot in top three. She was crowned the second runner-up. Lalela was asked to boycott the pageant because it was held in Israel this year. Israel is described as an apartheid state because of their treatment of Palestinians so the South African government later withdrew support for the beauty queen. Lalela was determined to compete in the pageant despite the controversy that surrounded her.

“What a powerful final answer from South Africa. #MISSUNIVERSE. The 70th MISS UNIVERSE Competition is airing LIVE around the world from Eilat, Israel on @foxtv,” read the tweet.

Here is a look at the top five,