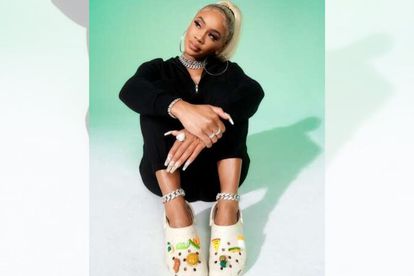 Saweetie wears a pair of Crocs
Image via Instagram
@crocs

Saweetie wears a pair of Crocs
Image via Instagram
@crocs

Crocs: You either love them or hate them and there is no in between.

But whilst many detest the clog-style shoe, it has seen an increase in popularity after it first burst on the scene more than a decade ago.

In fact, Crocs has sold over 300 million pairs of shoes since its inception in 2002.

And now the infamous footwear has even been named ‘Shoe of the Year’.

SHOE OF THE YEAR

Known as the “Shoe Oscars”, Footwear News Achievement Awards named the Crocs Classic Clog the 2021 “Shoe of the Year” .

Previous Shoe of the Year winners have included the Nike Dunk, Adidas Yeezy Boost and the Fenty Puma Creeper.

According to Footwear News, the “Crocs phenomenon” has witnessed a full market takeover in 2021, “appearing on the feet of everyone from toddlers to baby boomers — and both men and women”.

In recent months Crocs have launched wild and wacky collabs from Balenciaga to Justin Bieber to Space Jam and even a KFC-inspired clog.

And it seems consumers just can’t get enough with the billion dollar brand seeing a dramatic increase in demand in 2020/2021, in the midst of a pandemic.

Whilst Victoria Beckham infamously said she would “rather die” than wear a pair of Crocs, other celebs are big lovers of the brand

Stars like Nicki Minaj, Diplo, Ariana Grande and Post Malone have been spotted wearing the brand, spurring their fans to drive sales through the roof.

There’s a Crocs for every occasion – including Christmas!

ALSO READ: Ami Faku’s shoe disaster: ‘I’m not ok with how she wore those Nikes’