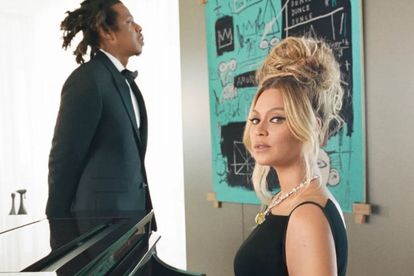 Beyoncé models the Tiffany Diamond in a new Tiffany & Co campaign alongside husband Jay Z in front of a painting by Jean-Michel Basquiat.
Image via Twitter
@tiffanyandco

Beyoncé models the Tiffany Diamond in a new Tiffany & Co campaign alongside husband Jay Z in front of a painting by Jean-Michel Basquiat.
Image via Twitter
@tiffanyandco

Superstar Beyoncé has made history once again, and this time it has to do with a diamond discovered in Kimberley, South Africa…

This week, the singing sensation and her husband Jay Z were announced as the newest celebrity ambassadors for luxury jewellery retailers Tiffany & Co.

The married couple are pictured together in a campaign titled About Love, which, the brand claims portrays a “modern love story”.

“Ushering in a new brand identity, this campaign embodies the beauty of love through time and all its diverse facets, forging a new vision of love today,” the company said of The Carters involvement.

And the singer is positively blinging, modelling a large yellow diamond in the pics, identified as the company’s most prized possession; the iconic Tiffany Diamond.

The Tiffany Diamond is a 128-carat yellow diamond discovered in Kimberley mines in 1877.

The precious stone – considered to be one of the world’s biggest and most priciest yellow diamonds – was bought the following year by Tiffany & Co founder Charles Lewis Tiffany for $18,000 (almost R300 000).

The diamond – which has been largely hidden from the public – has made a handful of appearances at a few earlier jewelry exhibitions and only ever worn by four women, with Beyoncé being the first ever black woman to do so.

In 1957, US socialite Mrs E Sheldon Whitehouse wore the piece to a party, and a year later, screen legend Audrey Hepburn famously wore it for her iconic movie role Breakfast At Tiffany’s.

Fast forward to 2019 where Lady Gaga wears the ornate piece to the Academy Awards where she was nominated for her role in the movie A Star Is Born.

Apart from wearing the Tiffany Diamond, Beyoncé and Jay Z also feature another piece of priceless art in their campaign: The painting Equals Pi by late US artist Jean-Michel Basquiat which has never been seen before in public.

And the video campaign features the vocals of Beyonce’s rendition of Moon River, which was written for Audrey Hepburn to perform in Breakfast At Tiffany’s.

Whilst fans of Beyonce have praised the singer for making fashion history, South African tweeps are not impressed.

“Bring back the stolen diamond from Kimberly, South Africa,” tweeted one irate user.

“They stole it from South Africa, Kimberly city. That’s the address they should return it to”, tweeted another

A third tagged the singer in their tweet: “Please tell @Beyonce you know where Kimberly is, you can drive there. #Bringbackourdiamond”.

Meanwhile, Tiffany & Co have reportedly pledged  $2 million (over R30 million) toward scholarship and internship programs for historically black colleges and universities. The details are not yet known on who this will impact.