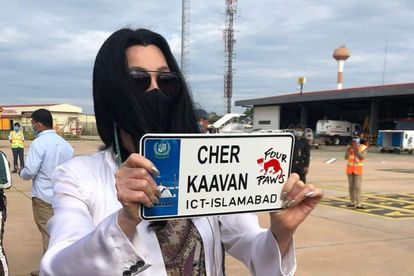 Grammy-winning singer Cher has become as well known for her commitment to animals as she is for her number one music hits over many years.

The US singer and actress, also known as the Goddess of Pop, has been churning out hit songs for more than 60 years. But Cher, now 74, is also using her energy and influence to release animals living in abysmal conditions in various parts of the world.

Just recently, Cher led a social media campaign that resulted in the release of a 36-year-old male elephant from a zoo in Islamabad, Pakistan.

Kaavan, known as the “world’s loneliest elephant”, was donated to the zoo by the Sri Lankan government in 1985, when he was a year old.

Kaavan had been living in deplorable conditions for years, and showed signs of depression and distress after his companion, Saheli, died in 2012.

The successful resettling of Kaavan was thanks to the efforts of Cher’s NGO, Free the Wild, the NGO Four Paws, the government of Pakistan and businessman Eric Margolis.

Kaavan was safely resettled after a 10-hour flight to the South East Asian country of Cambodia. He will be spending the rest of his days in the company of other elephants in a 10,000ha wildlife sanctuary in Siem Reap, Cambodia.

WATCH: Kavaan meets staff at his new home in Cambodia:

Kaavan has been connecting with another elephant after years of solitude. The huge change his new carers have seen in him has emphasised the cruelty and depression endured by animals kept in captivity.

WATCH: Kavaan has a mud bath in his new home:

CHER IS AT IT AGAIN

After the successful resettling of Kaavan, Cher has turned her efforts to helping a gorilla that has been kept in captivity in a Thailand zoo for many years now, the Daily Mail reports.

Pata Zoo is a small zoo on the sixth and seventh floors of a department store in Bangkok, Thailand. The zoo has been branded one of the saddest places in the world by Asia-based animal rights group Peta Asia.

CHER ADVOCATES FOR PRIMATES IN BANGKOK

Cher is now on another mission — resettling Bua Noi, Thailand’s only gorilla in captivity. The star has suggested that Bua Noi be moved to a natural environment in the Democratic Republic of the Congo, where she will be able to live normally with other gorillas.

Cher has also advocated for other primates kept in captivity above the department store to be resettled in an animal sanctuary — at no expense to the zoo owner or the Thai government.

CHER APPEALS FOR ACTS OF KINDNESS

Cher asked Twitter fans in Bangkok to assist in stopping the torture of animals at Pata Zoo. The singer also sent a handwritten message to Thailand’s environmental minister, Varawut Silpa-archa, requesting his kindness in helping to secure the release of Bua Noi from the zoo.

THE FIGHT FOR BUA NOI CONTINUES

Kaavan’s journey to freedom in Cambodia came as a result of years of campaigning by Cher and other animal activists. Cher has vowed to continue campaigning for the release of Bua Noi from Pata Zoo.