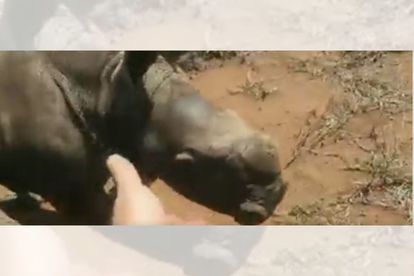 The Kruger National Park recently shared a video of a baby rhino getting comforted by a veterinarian while its mother is in the process of getting de-horned.

Getaway Magazine reports that due to rhino poaching authorities have to de-horn rhinos in order to save the gentle giant’s life. And so while this had to be done, a veterinarian gave the baby rhino some extra attention in order to keep the youngster calm:

“Appreciation Post: Baby Rhino gets reassured by the Vets as they prepare to dehorn Mommy to save her life from potential poachers,” the South African National Park in the Kruger proceeded to say. “Thank you for your gentle care and support for the future of conservation.”

According to the Wildlife Act, conservation efforts in South Africa is ongoing, but rhino poaching is still one of the most depressing and demanding issues.

The organisations said that they ultimately had to make an “unattractive choice”: Either lose more rhino to poachers, or remove the horns from the rhino themselves by means of rhino dehorning.

“It is a sad reality that in order to help save rhino species from the threat of poaching, the preemptive removal of their horns in a safe, controlled manner, has become one of the necessary and highly effective management tools for conservationists to deter poachers. Somkhanda Community Game Reserve, in northern Zululand, regularly dehorns all of their rhino and has seen a significant decrease in incursions.”

The rhino dehorning process is carried out by an experienced veterinarian and is a painless experience for the animal under sedation.

“Every precaution is taken to ensure that rhino dehorning is as stress-free as possible. Once the animal is under sedation, the sedative is partially reversed. This is so that the animal can continue to breathe unassisted.”

Then as soon as the rhino is immobilised, the helicopter crew notifies the ground team, who move with great speed carrying water tanks and all the necessary equipment for a fast and safe rhino dehorning.

The immobilisation drugs have no lasting effects on the animals. The team then records all the data – meticulously – before the veterinarian proceeds to remove both horns with a chainsaw and an angle grinder for a smooth finish.