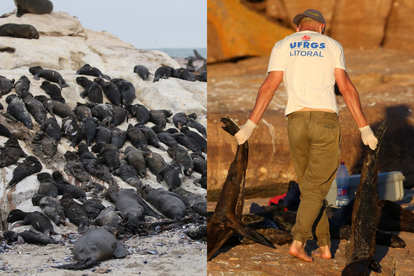 Thousands of seals are dying in Cape Town. Image via Facebook: @SeaSearch

Thousands of seals are dying in Cape Town. Image via Facebook: @SeaSearch

A large number of Cape fur seals have been washing up on the shores of Shelly Beach, Elands Bay, and Lamberts Bay in Cape Town over the last few days.

According to reports, there are no indications of how the seals are dying. Scientists are however trying to make sense of the situation and believe that something more sinister might be behind these mysterious deaths.

An investigation into the deaths of thousands of Cape fur seals is currently underway as organisations, such as Sea Search, the Department of Environment, Forestry and Fisheries, CapeNature, SANParks, the SPCA, Two Oceans and Shark Spotters, have put their heads together to find out why the West Coast’s favourite beaches are now sadly covered in dead seals.

Taking to Facebook, Sea Search shared a heartbreaking post about the incident while explaining that they are working overtime to clear up the beaches, adding that they are currently coordinating the data collection and response while trying to discover the cause behind the mortality event.

“We are collating the data collected from Shelly Beach, Elands Bay and Lamberts Bay on the Cape Fur Seal Mortality Event and Avian Flu. Looking through these pictures with heavy hearts.

“Sea Search is a small NGO but we are doing our best to play a key role in coordinating the data collection and response.

“We have numbers on mortalities at Elands and Lamberts bay, and working with the authorities, other NGOs, Vets and citizen scientists to start looking into what’s happening,” reads part of the sad post.

Cape Town ETC reports that the deaths coincide with an avian flu outbreak that has wreaked havoc in the Western Cape over the last few weeks.

Meanwhile, Sea Search has called on those willing to offer donations and also any information regarding the deaths of the seals.